Reflections on my First Tevilla on Erev Yom Kippur

Reflections on my First Tevilla on Erev Yom Kippur 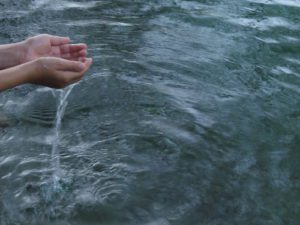 On Yom Kippur eve, amid the hustle and bustle of logistics and preparations, I took a moment for myself and left the house to go immerse in the mikveh. This is the first time that I had ever thought of this idea.

I suppose it is largely due to the increase in the public discussion around mikveh over the last year, and specifically as a result of my participation in a Facebook group, Tovlot B’nachat, that has opened another window into my eternal quest for a meaningful, empowering, spiritual immersion. Up until now it was clearly understood that only my husband goes to the mikveh on Erev Yom Kippur, but this time I went, and not alone – in a moment of spontaneity I took my 8 year old daughter with me.

On the way, as we avoided the usual shteibel traffic jams, I explained to her what you do and less of the why. I was nervous, amongst other things, about how someone who appreciates aesthetics as much as she does, would react to this slightly decrepit mikveh and the peeling walls. I prayed that her first encounter with the mikveh would be pleasant, but mainly we dealt with running to get there on time. At the entrance to the mikveh there was a long line of women of all ages. In all sorts of coverings. I was surprised at the popularity of the event and excited/nervous, trying to convey things to her and to myself; she in her calm way was absorbing it all and asking questions and seeing everything with an open mind. We were fortunate that right in front of us was Sara Friedland Ben Arza who explained the meaning of the purifying waters – parallel to a mother’s womb and the waters of creation, and even though her turn had come to go in, she continued explaining in her wonderful way, connecting my daughter to the meaning and the source of it all.

When we finally, gently, entered the water together we were enveloped by excitement and amazing gratitude.  This is the same mikveh where I yearned and prayed time and time again to be blessed with her. The natural way with which she embraced the water and the water embraced her (and us), and our prayer and the feeling of abundance and light – I prayed that her next encounters with the mikveh waters will be as perfect, enabling, compassionate and blessed, at least as much as  this one – and I felt the Heavens open.

Here are further resources on this minhag:

Tefillot Before your Erev Yom Kippur Tevilla
Sources for the Minhag of Women Immersing Erev Yom Kippur
A Total Cleansing: the Mikveh before Yom HaDin

And in the Forward:
Orthodox Women Dare To Go To The Mikveh On Yom Kippur Eve — Like Men

Yotvat lives in Jerusalem and works at Beit Avi Chai