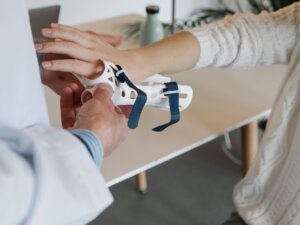 “May I have a fiberglass cast?” Falling off of her bike, she had fractured her distal radius, and the orthopedist had recommended a cast for the next six weeks.  Despite the pain in her wrist, the pain medicine, and the drama of going to the hospital in an ambulance, she remembered that she needed to go to the mikveh next week – a traditional plaster cast cannot get wet and might pose a chatzitza, a barrier to immersion.  If she did not ask for fiberglass, she might not be able to go to the mikveh until the cast came off.

Medical procedures and treatments can make visiting the mikveh challenging.  Immersion might lead to infection, while medical interventions can create a chatzitza (barrier) or cannot withstand immersion in water.  Sometimes it’s not possible to avoid these issues.  But there are simple ways to navigate the healthcare system and advocate for oneself that obviate issues that impede immersion and avert potentially lengthy delays before immersion is possible. Women simply need to know what to ask their healthcare providers and when to ask.

What steps can women take to prevent potential problems in immersion?  One step is careful scheduling of elective, non-urgent procedures. For example, after gynecological procedures that involve instrumentation or dilation of the cervix, some gynecologists instruct their patients to avoid standing water for two weeks to prevent the introduction of bacteria or other organisms that often live in moist environments into the vaginal canal.  Similarly, after surgery, physicians typically recommend against bathing with sutures, due to the risk of infection.  Although one does not always have the luxury of scheduling a medical procedure around mikveh, when one can do so without compromising medical care, it can make the difference between mikveh immersion at the scheduled time and an extended period of conjugal separation.

Unfortunately, not all medical procedures and care are scheduled in advance; unintended medical visits and emergencies arise. People get cuts, burns, scrapes, and wounds that require sutures, bandages, glue, creams, staples, and casts.  These lie on the surface of the skin and create a potential chatzitza.  According to Torah law, an object that covers the majority of the body that one would typically remove qualifies as a chatzitza.  However, rabbinic law also includes as a chatzitza any object that one would typically remove, even if it covers only a minority of the body.  Dissolvable stitches are not a chatzitza, since one does not want them removed.  A quick-thinking woman who is aware of the halachic benefits of dissolvable stitches over sutures that need to be medically removed can request them in the emergency department and obviate complicated niddah questions.

Casts pose a unique challenge for mikveh.  After a doctor returns a fractured bone to its anatomical position, it sets with a cast, which typically remains in place for several weeks. The simplest casts are made from plaster.  The benefits of plaster are that it is initially soft, which facilitates customizing its shape, it is cheap, and can be found in every orthopedic clinic.  Its limitations are that it softens and can crumble, it cannot withstand contact with water, and it is heavy.  Halachically, the plaster cast complicates mikveh immersion since it does not allow water to penetrate and reach the surface of the casted limb, and cannot withstand immersion in water.  Removing the cast early might allow the broken bone to move, and lead to intractable pain or swelling in the area of the fracture.  Waiting until after the plaster cast is removed can delay immersion for an extended period of time. Teshuva Meahava 2:366 prohibits immersion with a cast, even if this will cause the woman to remain in niddah for months. If the cast may not be removed without causing tremendous pain and danger to the limb, and must remain in place for several months or even weeks, some rabbinic authorities permit the woman to immerse with it, since the cast serves a medical purpose and she desires that it be there (Tsitz Eliezer 4:9).

Today, however, women have another option for casting, which avoids these issues.  A plastic cast, also known as a magicast, is lightweight, water-permeable, and stable in water. It has an inner lining made from a woven synthetic material that breathes and allows water to enter.  However, to classify the casted limb as immersed in water, one must confirm that the entire limb came in contact with water at the same moment and that the inner layer of the cast was soaked in water at the level of tofayach al menat l’hatpiach טופח על מנת להטפיח  — wet enough not only to wet a second object but for the second object to wet a third object.

Machon Puah conducted an experiment to determine whether the magicast meets these criteria, and how long it takes to penetrate the cast completely.  They placed a plastic cast on the thumb of a volunteer, and immersed her hand in a pan of beet water for two minutes.  When they removed the cast, they confirmed that the entire innermost layer was stained with beet water. In addition, the volunteer’s hand was completely wet.  In a separate experiment, they cast a volunteer’s leg and foot and immersed them in beet water for 10 minutes. Again, they found that the entire sock was dyed red except for two dry, white spots.  Since these spots were close to the opening of the cast and beet water had penetrated areas that were deeper, they concluded that shaking the foot in the water for 10 seconds can insure penetration to the entire foot.

These tests confirmed that the inner layer of lining of the plastic cast is water-permeable and allows the water to reach the surface of the casted limb at a level of tofayach al menat l’hatpiach,טופח על מנת להטפיח creating a connection between the water on the surface of the casted limb and the mikveh water.  To guarantee complete permeation, they recommend placing the limb in the mikvah water for 10 seconds and shaking it.  Based on the results of Machon Puah’s experiments, Rav Avraham Yosef, Rav Yitzchak Yosef, Rav Meir Nisim Mazoz, Rav Avidgor Nevensahl, and Rav Nachum Rabinovitch permit immersion with the cast.  Rav Shlomo Dichovsky and Rav Avraham Yitzchak Halavi Kilav permit immersion after the woman confirms that the area under the cast is clean and free of remains.[1],[2],[3]

Our resourceful patient’s doctor agreed to prescribe a magicast, which allowed her to visit the mikveh on time.  She felt fortunate that she knew to request the cast and hopes that this blog will enlighten and empower women to advocate for themselves and take steps to facilitate mikveh immersion.