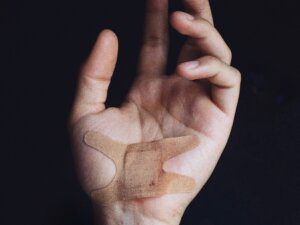 A few weeks ago, I posted to the Facebook group “God Save Us From Your Opinion: A Place For Serious Discussion of Judaism”:-

I’m a nurse who works in an emergency clinic. Yesterday a patient came in with a cut between her thumb and index finger, she needed stitches. Today she came again, this time with her husband. They said they had spoken to a Rabbi, who said that these stitches were a problem for the mikveh. They added that soluble stitches are fine, and wanted to switch the stitches – to which I had to explain that there is exactly zero chance of that. The surgeon who treated her said that the stitches can only come out after two weeks. I explained to  them that some stitches can come out as early as a week after, but it depends on the kind of cut, the kind of stitches, and how the healing process goes.

I have never heard of stitches being a chatzitza. Can someone please explain this to me?

The ensuing thread was fascinating, with many different yoatzot bringing sources as to why this would be a problem. When they explained it, it made sense – I guess this was just the first time I’ve heard of this (despite being a nurse for 6+ years and being married 14+ years). Other medical professionals weighed in as well, making for very interesting conversation on the intersection of healthcare and halacha.

The medical issue is that removable sutures and dissolvable sutures are used for different things. Dissolvable sutures are preferred in internal stitches during a surgery, or on tissues that aren’t subject to a wide range of movement. Removable sutures tend to be preferred for skin lacerations, especially around joints. Further, the preference in an ambulatory medical setting, like the emergency clinic I work at, is to use removable sutures, as they are considerably easier to work with, leave less scarring after removal, and have a lower likelihood of failure on external wounds. As for medical glue, this is only used for very specific, smaller, and straighter lacerations in areas that see close to no movement.

Further complicating this intersection of halacha and medicine is that one who has stitches should avoid bodies of water of any sort, even the most chlorinated of pools. This is to prevent infection at the wound site. So entering a mikveh with a sutured wound is just not a good idea from a medical standpoint. If anything, the use of dissolvable sutures would encourage going to the mikveh, which is a bad idea, medically.

When I approached some of the surgeons that work at the clinic, the overall response was that there’s no way they would switch to dissolvable sutures just out of patient preference, due to the medical indications and contraindications for which type of suture to use. When I spoke to my head nurse, she agreed with that, and added that it would be virtually impossible to ask the surgeons to do this. Besides, dissolvable sutures are considerably more expensive than removable sutures, and budgetary constraints would prevent anything of the sort, especially if it’s not medically indicated (and even contraindicated).

In the end, the interaction I had with the patient and her husband was short, and there was no follow-up. But I’m glad it happened, as I learned so much about a subject that I really do need to know as a nurse in community healthcare.

About the Author: Shmuel Yonah

Shmuel Yonah, BSN RN, made aliyah from Toronto in 2004 and now lives in Jerusalem with his wife and four daughters. He studied nursing at the Hebrew University Henrietta Szold School of Nursing at Hadassah Ein-Karem, and currently works as a community healthcare nurse.