5 Years In and Still Struggling

5 Years In and Still Struggling 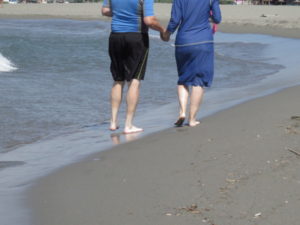 Every month as I emerge from the remodeled mikveh located a convenient five-minute walk from our home, I am visited by a familiar mantra: I cannot believe I just did that.

It’s not the mikveh, per se, which elicits consistent disbelief.  After five years of marriage, two children, and significant dedication to cultivating a more meaningful mikveh experience, I usually enjoy my monthly visits.  While the encounter is usually a far cry from spiritual rebirth, in the past year or so I have succeeded in feeling fully present as I loosely crawl beneath the mikveh waters.  Before removing my towel, I respectfully ask the attendant to leave the room after I complete the requisite immersions.  I love standing naked in one of the most peaceful, still rooms I have ever seen.  In that brief moment alone, immersion becomes prayer and my tears join forces with the gentle waters: I immerse for my husband, for each of my children, for friends still searching for spouses, and for the ill.

What elicits my monthly disbelief is our commitment to halacha.  After a few years of marriage and children, my husband and I still keep all the harchakot—no touching, no sleeping in the same bed, no direct passing etc..  As the years progress, as our love for each other matures and deepens, the burdens of these laws don’t lighten.  The difficulties have evolved over time,  far flung from the newlywed need for physical fulfillment.  The challenge now is a more urgent need both physical and emotional, for closeness with the one we love the most.  It does not help that I often feel that I am one of the few women my age frequenting the mikveh each month.  Hormonal contraception is not a viable option for me, and nursing has never yet worked for long enough to create any significant break between births.  All-day sickness makes pregnancy a small respite but certainly not a solution to our challenge.

A few months ago, someone in my immediate family became ill.  After the bleak diagnosis was given, I flew to the States to spend a week with my family.  I knew that I would arrive home in need of emotional support from my husband and I was comforted knowing that despite the fact that this trip would take up eight days of the ‘permitted’ half of our month, I would still have three to four more days once arriving home before my period was set to arrive.  However, upon landing in Ben Gurion Airport I felt that something had shifted.  Within three hours of arriving home, I started bleeding.  The plane ride made it come earlier, I told myself.  Next month, my cycle will go back to normal.  To my dismay, six months passed before I irregularly regained those four which I only later understood would continually fluctuate with the emotional tides of the family drama.  During those months of consistently shortened cycles, I realized how mentally significant my thirty-day-plus cycle had been for me all these years.  It meant that my husband and I were permitted to one another for more days of the month than not, but when that hormonal balance shifted so did my tenuous equilibrium with the halakha.  Month after month I felt worn down.  As soon as I went to the mikveh and the sweet first week would pass, I was already worrying whether we would make it through another Shabbat still permitted to one another.

Keeping these laws each month is my single greatest religious act of mesirut nefesh (self sacrifice).  My rational self has a hard time accepting that statement.  After all, mesirut nefesh is lighting Shabbat candles in Auschwitz.  Mesirut nefesh is driving two hours each month to the closest kosher mikvah.   Mesirut nefesh is maintaining steadfast belief in God even when life’s vicissitudes become too difficult to bear.  But I have no other way to describe my current commitment to this aspect of the halakhic system which has challenged me like no other from the first moment it became part of my life.

I know that many couples modify observance of the niddah system, particularly the harchakot, to better fit their relationship and religious orientation.  For my husband and I, this sort of “tweaking”, while at times alluring, is not something we feel comfortable with both because of our religious orientation and because we identify with the red lines drawn by the laws of harchakot .  That being the case, each month we do all we can to convey care and affection for one another despite the absence of a primary facet of our relationship.  Some months are, of course, more difficult than others depending on the current chaos of our lives.  While compromising halakhic observance is not an option, I pine for the days when the observant community will revert to the Torah-mandated seven-day system of niddah and not the elongated period of separation we observe today.