Yom Kippur and Immersion: Renewal of Self and Hope for a Good Year

Yom Kippur and Immersion: Renewal of Self and Hope for a Good Year 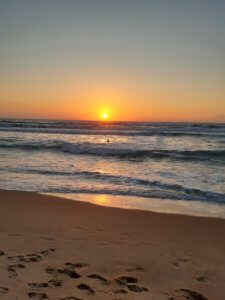 Usually, The Eden Center encourages women to adopt the custom to immerse in the mikveh before Yom Kippur, a custom that dates back at least to the period of the Gaonim (9th century). Because of Covid-19, this year, we are not encouraging anyone to immerse in a mikveh pre-chag, but rather, to follow the suggestion of the Rema – which would not apply to a niddah –  that one can shower in “9 kabin” (the equivalent of 11-13  liters of water) to fulfill this erev Yom Kippur minhag (SA 606: 4), particularly when it is difficult or dangerous to go to a mikveh. The Pnini Halacha directs that this should be done in a stream of running water from the shower, where the whole body is under the water at the same time for approximately 2-3 minutes (Pnini Halacha Moadim 1, 16:8). Again, this ruling does not apply for a niddah, when immersion in a mikveh is necessary to fulfill the Torah obligation.

Why has it become such a strong custom to immerse on erev Yom Kippur? Different reasons are given for this practice. Some see it as part of the general practice of immersing before a holiday, to be similar to angels or attain sexual purity, while others consider it to be an extension of the concepts of teshuva and taharah. Those who see it as a connection to repentance or purification, view both the immersion in the mikveh and Yom Kippur as our chance to start over. More than that – they see the values and symbolism of mikveh as similar to those of Yom Kippur.

In his book “Food for the Spirit: Inspirational Lessons from the Yom Kippur Service” Rabbi Shmuel Herzfeld explains multiple levels of connection between mikveh and Yom Kippur. He asserts that both mikveh and the Avoda (Temple rite) of Yom Kippur share common spiritual ideas; that people have the ability to be reborn and invigorated in our service of God. Each allows us to get a fresh start. Yom Kippur is more than God simply not punishing us for our sins; we are given the opportunity to begin every year with a clean slate from God. It is as if we are spiritually reborn and get to start anew.

The Yom Kippur Avoda performed by the Kohen Gadol (High Priest), revolved around purification for the entire people. The immersions the Kohen Gadol performed during the Avoda remind us that the ritual was about a fresh start. In the process, there were five mikveh immersions that took place. Each immersion was an integral part of the rituals of the day, and part of the transformative process of renewal and forgiveness for Am Yisrael. Indeed, the Talmud uses the imagery of the mikveh to describe the spiritual purification process that we undergo on Yom Kippur. Tractate Yoma (8:9) ends with the Mishna stating “Rebbe Akiva said ‘praiseworthy are you, Israel; before Whom do you cleanse yourselves? Who cleanses you? Your father in Heaven!’ As it is said, ‘And I will sprinkle water upon you, and you shall be cleansed” (Ezekiel 36:25). When we immerse in a mikveh we connect to the same ideas of renewal and rebirth inherent in the ritual of the Avoda.

Mikveh can also mean “hope” from the root tikvah (hope). In Rikvah Slonim’s anthology “Total Immersion” Chana Willig Levy writes that mikveh is a “house of hope” – a place where hope resides, where countless individuals come and stand before God, pouring out their hopes and prayers. Likewise, hope is a central theme at the time of the High Holidays. This is reflected in Psalm 27, L’David Hashem Ori V’Ishi, that we recite from the beginning of Elul until Hoshanah Rabbah. As the Psalm says, if we hope in God, He will give us courage. The more we commit to Him, the more hope we will have. During the Holocaust, the Piaseczno Rebbe felt it was important to go to the mikveh on erev Yom Kippur as a way to show our connection and recommit to God by reaffirming that we are part of a sacred tradition. Going to the mikveh during the Holocaust exemplified that when we immerse in a mikveh we are reborn and recommit to the traditions of our ancestors. Mikveh is not only about rebirth and transformation through the vehicle of sacred water, but also a reaffirmation and recommitment to who we are and what we are about. This is exactly what Yom Kippur is about as well.

Wishing you a year of renewal, hope and commitment. גמר חתימה טובה