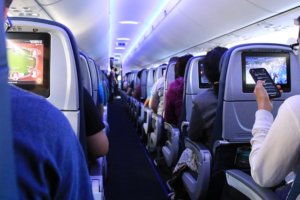 For 16 years, my life has followed a rhythm.  Every other week, after havdala, my husband rushes around the house quickly packing, tying up loose ends and getting ready to leave for the airport.  Our children write him a “machtos”, a note to be read on the airplane.  I drive him to the airport treasuring every second of the thirty-minute car ride.  I feel totally connected to him, as close as two people could ever be, a feeling that will sustain me over the course of the coming week of separation.  As he leaves the car and says goodbye, my heart sinks but I know that we will stay connected no matter how far away he might physically be. Six days later, a few hours before Shabbat, after multiple emails, whatsapps and phone calls several times a day, I return to the airport to reclaim him.  He has returned home to me.  I cherish this car ride too because it allows us to reconnect and transition back to life on the same continent.

I am not alone.  In today’s global economy, frequent absences from the home are increasingly more common. Between twenty to thirty million Americans, primarily men, travel frequently for business. In Israel, Zeev Bielski, former chairman of Jewish Agency, estimates that “hundreds, if not thousands” of Olim, primarily men, commute abroad regularly, certainly in the initial stages of aliya. Although the vast majority of Israelis do not work abroad, those who work in Israel travel for work.  In addition, Israeli men leave their wives for extended periods of time to perform army service.

Although psychologists are only beginning to grapple with this phenomenon and its impact on marriage,  halakha has long had insight and guidance into this contemporary challenge. Surprisingly, the traveling spouse has a unique halakhic status: before departure, he is a yotze laDerech and upon his return, haba min haDerech, with unique obligations and leniencies.

Prior to departure, the yotze laDerech  is Biblically obligated to have relations independent of the mitzvah to procreate.  Yevamot 62b derives this obligation from, “And your desire shall be to your husband” (Genesis 3:16), because prior to departure, “the wife desires him more”. Although many argue that the obligation exists only if the husband will miss the next period of conjugal obligation (once a week for a Torah scholar, twice a week for the typical man), Yavetz disagrees and argues that this obligation exists whenever the wife desires him even if the husband will return before the next conjugal obligation.  Shevet Halevi adds that certainly when the husband leaves to serve in the army and faces grave danger, or travels a great distance (a flight abroad qualifies), then the wife’s desire is greater, and he is considered yotze laDerech and obligated even if he returns before the next prescribed time of conjugal relations. Rav Eliezer Melamed adds that even a husband who sleeps at home every night and leaves for only one night is obligated in conjugal relations prior to leaving. However, a husband traveling for the performance of a mitzvah is exempt, either because someone who engages in a mitzvah is exempt from a mitzvah or because having relations may distract him from performing the mitzvah.  Shevet HaLevi adds that a husband traveling for a mitzvah must nevertheless depart with kind, loving words because these gestures will not prevent him from performing the mitzvah. Business trips, he states, do not qualify as a dvar mitzvah and a husband traveling for business is nevertheless obligated

Yevamot quotes Rabbi Yehoshua ben Levi who cites an alternative verse, “And you shall know that your tent is in peace….” (Job 5:24), as the source of the husband’s obligation to have relations prior to his departure.  Why is a second verse necessary? To teach that this obligation overrides the prohibition against intercourse during onat prisha, the time when a woman anticipates her next period and relations are forbidden.  Rishonim debate the nature of the obligation when departure coincides with the anticipated time of her period.  While Rashi explains that the obligation is to have relations, Tosfot argues that relations are prohibited when she anticipates her next period and the obligation is to “speak to her heart with words”.  Shulchan Aruch states that the husband who is about to leave should (but is not required to) have relations even if it is the anticipated time of her period, and Rama adds that nevertheless one who is stringent and embraces her with words will be blessed. Marshal asks how can one who is stringent be blessed if he ignores the mitzvah of relations prior to his departure?  He answers that one should act stringently by scheduling his travels to avoid departure during the time of the wife’s anticipated period (which I have found is nearly impossible in today’s world). Other leniencies allowed for the yotze laDerech include relations on the tenth night of Av, during the day (for those who prohibit daytime relations), or in a room of sifrei kodesh (holy books) that would normally need to be covered.

What are the obligations of haba min haDerech when he returns?  Bava Metzia 107a learns from “Blessed shall you be when you enter” (Devarim 28:6) that a returning husband will not find his wife in a state of uncertain niddah status rendering her forbidden.  Based on this, many poskim conclude that the husband, haba min haDerech, is also obligated to have relations, because in his absence, her desire for him has increased.  However, this obligation is suspended prior to her anticipated period. Rashba disagrees and extends the obligation even to the time when she anticipates her period.   Rav Melamed instructs the husband to return home directly from the airport to fulfill his obligation and reconnect with his wife as soon as possible and sharply criticizes men who return to the office before seeing their wives.

When the wife leaves on a trip, most poskim do not obligate the husband to have relations.  Some have argued that if it is not the time when she anticipates her period, and relations are not prohibited, an obligation exists, as it does any time she desires.  However, when the wife travels, the prohibition against relations during the time when one anticipates her period overrides the obligation as it normally would. Rav Melamed explains this halakhic inconsistency permitting relations during onat prisha when the husband departs but prohibiting it when the wife departs reflects greater concern regarding the husband’s potential infidelity.   I would like to propose a different reason for the halakhic distinction between the departure of the husband with that of the wife. At their wedding, the husband accepted the obligation to provide her with food, clothing and relations. When he departs, she may feel forlorn, lonely and abandoned. He is obligated to comfort her with kind words and intimacy. Alternatively, when she departs, he may similarly feel dejected. But the ketuba has not created this same obligation in reverse.

Absence does not always make the heart grow founder.  An Israeli study among predominantly Orthodox commuting couples (who typically were away for eight days 8-10 times per year) reported reduced marital satisfaction when compared to non-commuting couples.  However, couples who experienced greater satisfaction with their spouse when the spouse was home had greater satisfaction when the spouse was away. Among Hong Kong couples whose spouses commuted regularly to mainland China, the most significant predictor of marital satisfaction was fear of an extramarital affair. Indeed, the number one reason for engaging in an extramarital affair is lack of sexual satisfaction.  Strengthening the sexual relationship within a marriage before and after a prolonged absence can have a profound impact on marital stability.

The traveling spouse has a special status in halakha with unique obligations and leniencies.  By strengthening the sexual connection between the couple before and after the spouse’s trip, halakha solidifies the traveling spouse’s sexual interest in his/her partner and insures sexual satisfaction within the marriage, the most effective deterrent to an extramarital affair.  Halakha provides a framework to ease the stress of exit and reentry, ground the couple in their relationship when he leaves and when he returns, focus the couple on each other and maximize intimacy when they are together. Remarkably, over 1500 years ago, our Sages understood the strain that frequent travel can place on a marriage and offer a framework to support couples thru these challenges.