The Importance of Saying Yes

The Importance of Saying Yes 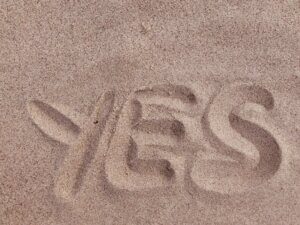 There is an interesting discussion on 88a of tractate Pesachim in which the question of consent arises. Can a man slaughter the Passover offering for his adult children and wife? The Talmud concludes that it can only be done with their explicit awareness. It then goes on to ask whether a wife needs to say yes or no. In other words, is her silence a sign of acquiescence unless she vocally protests? It then goes on to suggest that perhaps, she has to actively consent in order to be included. I am often amazed at how relevant 2000 year old conversations remain for what today is the debate around consent. Is it only a clear “no” that requires a man or women to stop sexual interaction or is the affirmative “yes” necessary, as the sexual intimacy progresses? Today, sexual health advocates and educators are leaning hard towards affirmative consent in order to clarify intent. While this can sometimes border on the absurd, it creates a language of active engagement that forces both participants to acknowledge what is happening in the moment.

Learning this sugya was particularly interesting in light of an on-line lecture I gave together with Dr. Elliott Malamut shortly before Purim. The Topic was Megillat Esther and the Question of Consent: A Conversation about Judaism and Sexuality. We started off with the Book of Esther, focusing on chapter two in which virgins from around the kingdom are scooped up and brought into the harem for a year of preparations, before being brought to the king’s bedchamber

For children, this is depicted as a beauty pageant in which Esther emerges as the winner because of her astonishing beauty. However, a look at the text is far darker. Not only does the king sleep with the virgins before he finds his queen, but a second round of these girls are gathered up afterwards to satiate the king’s seemingly never ending sexual needs. While this presumably provided these women with a degree of security (unless you are unceremoniously disposed of as with Vashti!), their lives are  entombed in the harem with no possibility of release. Consent is irrelevant when a powerful ruler makes unilateral decisions

The Talmud wonders about Esther’s agency regarding her sexual relationship with Ahashverosh. In the midrashic narrative of the story, she is already married to her Uncle Mordechai. After becoming queen, she continues to act as his wife. There is a particularly sexualized description of her leaving the bed of the king in order to immerse in a mikveh and sit on the lap of Mordechai. While normally an adulteress is prohibited from having sexual relations with her husband once she has taken a lover, in Esther’s case, the complete absence of her consent works in her favor. Since women are defined as passive in the sexual act or, in the words of the Gemara, compared to the earth of the ground, she is not complicit in any way and thus, remains permitted to her husband. Once she actively agrees to go to Ahashverosh to save the people, she becomes complicit in the sexual relationship, and as a result, prohibited to her husband. This is why, according to the midrash, she hints at permanent loss of intimacy with Mordechai in the words, If I am to be lost, I shall be lost, meaning lost to you as wife

As Elliott and I continued discussing the broader topic of Judaism and Sexuality, focusing on the challenges facing young religious Jews, before, during and sometimes, after marriage, I returned several times to the suggestion that religious parents and educators would do well to use the stories in the Tanach, and the many pages of Talmudic discussion, to ground the discourse in familiar narratives and our “own” language, providing a natural resource in which to bring up difficult conversations around consent, boundaries, sexual values and ethics, and healthy choices. This will allow young adults to hear that Judaism has what to offer them beyond the very limited and technical discussions of what is allowed and mostly, unfortunately, an emphasis on what is prohibited. It is ultimately our responsibility to provide safe outlets for men and women of all ages to ask questions, find resources, seek pastoral counseling, and critically, understand what it means to have agency and consent over their body always