The Balaniot Course: A Class on Fear of Water

The Balaniot Course: A Class on Fear of Water 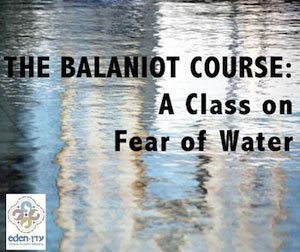 The Eden Center has, over the last year, developed and been teaching a 10-week balaniot class for experienced balaniot to learn about women’s issues that they encounter in their work, including abuse, post-partum depression, and illness. This week, on the first week of the latest round of the course, the balaniot came together to learn how to help women who are afraid of the water.

The group had just finished an “icebreaker” activity, where they discussed why they had become a balaniot. One woman shared a story of arriving at shul on Friday night and finding the mikveh locked. A woman in theshul asked her husband to climb through an open window to unlock the door and then agreed to observe her immersions for her. She was so touched that this couple had gone through such great lengths for her that she decided to become a balanit herself.

After the introductory session, the assembled group shifted their attention to the topic of the day: fear of water.

Though it might seem surprising to some, aquaphobia is relatively common. When plagued by this fear, attending the mikveh can be a source of tremendous anxiety, making the completion of the mitzvah onerous and painful. Esther Gur, a swimming instructor, lifeguard, and swimming teacher trainer of over 40 years, was herself afraid of water as a child. Esther is living proof of just how far someone can come in overcoming fear and phobia. Now, Esther was about to start her lesson on how balaniot can teach women afraid of immersing in water to overcome their fear, and even come to tovel b’simcha.

Suddenly, a wave of anxiety and panic swept through the room. One woman, in particular, shrieked as she thought of her sleeping baby, parked in a stroller just outside the door because the classroom was so full it could hardly fit another soul. A mouse! Fears come in all shapes and sizes: some scamper across the room and some sit there, placid yet daunting just the same.

Caught off guard, some of the balaniot had jumped to their feet, looking around and re-gaining their bearings as they saw that the coast was clear and all was well again. Though unexpected, it set the stage for Esther Gur to teach the balaniot how to act as guides to women who fear the water. If you bend your knees when your head is under water, she explained, you’ll always end up back on your feet.