Mikveh in the Snow

Mikveh in the Snow 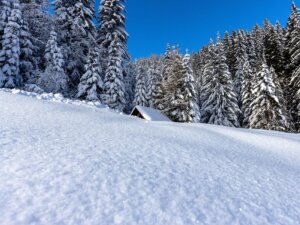 As the sun shines down day after day it is hard to believe that there was ever snow in Gush Etzion. But the recent snowstorm in New York has triggered memories from our unusually heavy snowstorm last month.

The snow storm started on Thursday and left enough snow to close everyone in for most of Thursday and part of Friday. After stopping for a few hours on Friday, enough to allow the roads to open briefly before closing again, the late afternoon became dark and heavy with clouds. Flurries began falling right before Shabbat began. I had agreed to work as the mikveh attendant since I live across the street from the mikveh and thus, needed to walk the least to get there.

Already before Shabbat I was asked to take a woman who lived at a considerable walking distance and wanted to drive back and forth. I asked her to come 20 minutes before candlelighting. When I entered the mikva, I discovered the heat was not working and the water in the mikveh was eight degrees lower than usual (28 degrees Celsius instead of 36 degrees). I apologized but the woman wanted to immerse anyway. I told her to immerse only once, the minimum halachic requirement, but she insisted on immersing four times as per her custom. When she emerged from the dressing room afterwards, she was shivering and her teeth were chattering – not only because of the cool water but because there was a broken window in the dressing room letting in cold air. I explained to her that she should avoid seeing her husband before the stars came out because she is not halachically permitted until then, but if there was no choice, she could rely on the leniency of Rabbi Moshe Feinstein that as long as children were around, she and her husband could see on another but must avoid touching.

I called the mikveh supervisor who gave me instructions on jump-starting the furnace before I went to finalize preparations for Shabbat. When I returned, I discovered the building had become colder as had the water (now at 27 degrees). In addition, it was now snowing heavily. Nonetheless, I sat back to wait for the five women who had scheduled appointments (only necessary on Friday night). One by one they came in covered with snow. Although I told them about the cold water and lack of heat, they all insisted on immersing. I instructed each one, quite firmly, to only immerse once and although some of them laughingly joked that they were copying their righteous great grandmothers in Poland, I pointed out that the generations have weakened and while in days of yore they may have been accustomed to immersing in cold water, we are not, and thus, there is a greater danger.

The whole process took much longer than usual for each woman had to peel off layers of snow covered outer clothing before going into the rooms and peeling off layers of inner clothing. One woman came accompanied by her husband and although I had received instructions to let him wait outside, I insisted he come into the small makeup room and shut him in. When I realized it was taking a long time, I knocked on the door and gave him a few Nashim magazines lying around to read. I was not immune to the fact that a man had entered the inner sanctum of the mikva and in fact, my mikveh supervisor would possibly have had my head, but, I could not justify leaving a man outside in the freezing cold just to preserve the modesty of the building. Bringing him into a closed room was an obvious solution.

The immersions themselves involved a lot of squealing and deep breathing but eventually all of the women got through the process and began to bundle up to go home. One woman wondered aloud if her husband would have gone to the same trouble for her. The couple had the longest walk and I insisted that they take extra towels to wrap around their heads and face to buffer them from the very heavy snow that was falling without stopping. I even invited them to come have dinner at my house but after thinking it over, they preferred to go home. As I was set to close, one more woman trudged up, apologizing for her lateness. When I left, finally, the footsteps and tire tracks from earlier in the day had been completely obliterated. The world felt very clean and fresh and pure. Not unlike the spiritual experience some women have in the mikveh.

Saturday night I went and checked on the mikveh and discovered the water had dropped even further (now at 21 degrees) and there was still no heat. In addition, the path to the mikva was filled with snow and no one could come and shovel it. I made the decision, together with the supervisor, to close it for one night although doing so meant women could not even go to Efrat to immerse since the road was closed. Two women, however, called me personally and insisted that they wanted to go immerse despite the difficulties. And so, I trudged back two more times to allow them the ability to fulfill the mitzvah they so desperately wanted to fulfill. And I wondered, would I do the same?