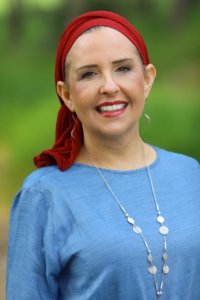 by Avigail Rock z”l
This was first published in partnership with The Layers Project Magazine.

A few months after giving birth to my fifth child, I had a conversation with a cousin whose mother had passed away from cancer. She asked me if I did a yearly checkup. I was only 38 years old at the time, and saw no reason to check. “No,” I told her, “I don’t check. I’m too young to do that.” But the conversation stayed with me, and several months later, even though I hadn’t felt anything, I decided to go see a breast surgeon.
During my visit to the doctor, he unexpectedly said that he did feel something. “It’s probably benign,” he said, “but just in case I will send you for a biopsy. Don’t worry about it.” Well, the biopsy came back malignant. The doctor called me in and said, “I’m sure this is something small and it’s nothing to worry about, but actually we need to remove a bigger sample to see what’s going on—I’m sure it’s nothing major, but just in case.”

The findings of the next tests were that unfortunately, all the layers had cancerous cells. “I’m sure it’s nothing to worry about,” he said, “but we need to see if there’s any lymph involvement.” To all of our dismay, there were 43 lymph nodes involved. People often don’t make it through treatment when the cancer is spread so widely in the lymph system. Now I got alarmed and immediately told the doctor “Don’t say there is nothing to worry about!!!” Instead, he explained that I was going to need to have extensive treatment and that it was worth starting as soon as possible because of the lymph involvement, which as he had explained, not everyone makes it through.

Soon afterward I started with treatments. There were good days and bad days, but overall, thank God, things were progressing successfully.

I was very open about my cancer and its treatment and what I was going through. Hiding it would have been worse for me. It was important to speak about cancer with my kids, my friends, and other women. It was part of my healing process to have people around me, whom I knew were davening for me, whom I knew were thinking about me. It was important for me that my kids know that they shouldn’t feel any shame and they can feel comfortable talking about this. And I thought it was especially important to share with other women so they would know that you can get breast cancer even when you’re so young, even when you’ve been nursing.

When I woke up from the surgery to remove my breast I thought that I would NEVER look. Who needs to see what’s beneath your neck?!? It took me a long time to be ready for that stage.

Pretty soon I had to go to the mikveh.

Though on the day to day I was managing with all the changes in my life and body, somehow the mikveh experiences were different and much harder. The mikveh made it all the more real and scary. Mikveh made me feel more vulnerable. And the moments of prayer at the mikveh can be intense and scary too, to say the least.

Although I was very open about the fact that I had cancer and was having treatment, there was something different when I had to go to the mikveh. I felt strange and awkward at the thought of standing naked and exposed in front of the mikveh attendant whom I knew from the neighborhood, and whom I might bump into at the makolet.

When my hair started falling out it was a bit shocking, but I wore a hat most of the time and nobody could see my balding head; I was lulled into thinking that everything was still pretty normal. Well, you can’t hide a bald head at the mikveh — or your scar — and I really didn’t want the local mikveh attendant to see me in that vulnerable way. It was just too difficult. So I decided I would go to the Satmar mikveh in town. After-all, everyone there has their head shaven so I wouldn’t stand out or be any different! I had a decent encounter there, and they were very willing to help. I appreciated that the mikveh attendants would be extra sensitive to what I was going through, but they didn’t necessarily know the relevant halakhot and where they could be more lenient. They wanted to do the right thing but it was obvious that they were uninformed and untrained in dealing with women like myself.

When The Eden Center invited me to be part of their mikveh attendant training course and teach attendants about what I was going through, how to help and how to make a woman going through breast cancer treatment feel more comfortable at the mikveh, I jumped at the opportunity. As somebody who went through it, I wanted to explain that it’s really hard to get to the mikveh, and sometimes the exhaustion of treatments makes it even more difficult (and you need to be bumped to the head of the line or you just won’t have the energy to immerse — maybe for the next few days). I wanted them to understand how important it is that the mikveh be clean and sterile so that you don’t get an infection when your immune system is lowered. I wanted to convey to the balaniot that as hard as it is for many women to stand naked in front of them, when you don’t have a breast — and you yourself don’t want to look at it — it’s really hard to undress and feel that you have to subject someone else to seeing your body. Even if they are the most wonderful and kind ladies, all you can think is “what will she think of my body?” And having a look of shock or dread on their face is the worst possible thing they could do — even if it is difficult to see. And, with each visit, they have to know that this could be the last time at the mikveh – with no extra chances to get it right.

Going to the mikveh was important to me, not only because it enabled my husband’s physical and emotional closeness and support, but also because it meant that even though I was going through a difficult time, I was still normal. I still needed, and was able to do the thing that all married Jewish women do. And that gave me hope.

I was in remission for a few years, but my breast cancer saga is not complete. Right now I need your tefillot to make it through. Please daven for me, Avigayil Malka bat Chana Yehudit, and the many women like me that are fighting daily.”

Avigal wrote this blog five weeks before she passed away. It is posted here in loving memory and tribute of her. There is a community based Tanakh learning happening in her memory. Join in here.

Avigail worked with The Eden Center to increase awareness about breast cancer through the Mikveh. This blog is part of her legacy. To support Eden’s continued work in this area, donate here.