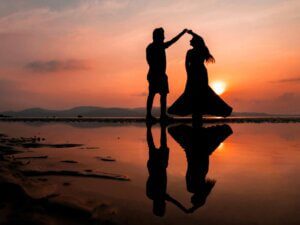 We say that mikveh night is like a renewal of marriage. It’s a time where we start again, recommit ourselves, and come together as a couple – just like at our wedding. It’s a beautiful idea that each cycle we return to being the young chatan and kallah. But, for some people, the wedding night doesn’t bring up only pleasant memories. For many, the wedding night elicits its own challenges or memories of feeling anxiety, nervousness, and sometimes even pain. So when we equate mikveh night with the wedding night, we have to keep in mind that not everyone has a positive wedding night experience. I think that’s why the community I live in has increasingly advised against insisting on intercourse on the first night.

I remember being told that the wedding night can be a drastic shift from nothing to everything. You go from not touching, or even doing anything that could lead to touching (we kept the laws of shomer negiah strictly) to directly entering a physically intimate space. You go from zero to 100! And, that can be really challenging for many couples! So, the advice which we received in our community was that while a couple could certainly engage in sex on the first night if they were ready, there was no pressure to have intercourse on the night of the wedding. Rather, we could take our time to ease into the physical realm into our relationship. From what I’ve heard, that’s fairly common advice and the direction given to many couples today. Indeed, it’s  becoming increasingly popular to advise young couples to use the first night to connect physically without feeling they need to reach an “end goal”. They are advised, instead, to learn about themselves and each other: how to communicate and how to get used to this new status. This advice seems to me to foster a positive space of intimacy. Indeed, there are always many factors that go into a couple’s decision to be intimate. By not putting pressure on the wedding night, here too, we give the couple autonomy to choose together when it is right for them to have intercourse.

But, if that’s the case, and if the mikveh night is like a wedding night, why are we not consistent with our messaging about intercourse on these two respective nights? Let’s think about it logically. Every cycle, we go from keeping the halakhot that come with a niddah status like not touching, and the harchakot, to being permitted to engage in a full physical relationship after mikveh. The shift from niddah status to being mutar all at once can be just as drastic for some as the wedding night. It can feel just as sudden a transition into physicality as if you’re being “touched for the very first time”. For some, this messaging can be beautiful, exciting and intimate; yet, there are some for whom this can be overwhelming, confusing, and stressful — just like the first night for a chatan and kallah.

Therefore, I think it is important to make clear that there is no absolute need to have intercourse on mikveh night. Moreover, the pressure to have sex can make it harder for the couple to comfortably shift back into the physical space. Especially for couples at the beginning of marriage who are just learning to navigate the physical together, going to the mikveh involves figuring out how to reintroduce sex into their relationship. The pressure imposed by the assumption (sometimes misconstrued to be an halakhic obligation) that couples must engage in sexual intercourse on the night of the mikveh is stressful and unwarranted.  Couples can certainly choose to resume full relations that night, but for couples who find this dramatic shift to be hard to make so quickly, I think it’s important they hear the clear message. Namely,  they can trust themselves to know their emotional state and use that to guide their decisions about whether to have intercourse that night. They can use the mikveh night as an opportunity to reconnect and reintroduce physical intimacy into their relationship, without the pressure.

Aside from the intense pressure couples can feel as a result of the assumption that mikveh night = sex, we often don’t acknowledge another problem this causes couples. I believe it is not tzanuah for us to hold this idea that mikveh night is equivalent to having intercourse. We all know that a married couple is going through cycles of on and off in their relationship. But what they are doing in the privacy of their bedroom, how often, and on which nights, is of no consequence to anyone else. The same way that holding hands speaks nothing about what is happening that night, neither should going to the mikveh

It creates additional problems as well. The fact that we assume everyone is going home to have sex, makes us feel uncomfortable sharing with others that we have to go to the mikveh. We shy away from being open and educating our children, out of fear of oversharing with them that their parents are having sex that night. We get stressed about people seeing us with wet hair, or without nail polish. We are ashamed when we bump into someone we know on the way in.  It’s almost as though others finding out that I’m going to the mikveh is as bad as them walking into my bedroom. In turn, we can’t ask our family members for help getting to and from the mikveh. And we can’t  ask friends to watch our kids.

Thus, in summation, I think that just like we have removed the pressure of intercourse from the wedding night, we ought to remove that pressure from mikveh night. In doing so, we will make a healthier space for intimacy in our homes in the three ways I mentioned above. Firstly, it will empower couples, giving them the ability to choose what is right for them and when it is right for them (without any underlying pressure). Secondly,  it would ensure that our community can respect the autonomy of the couple and their privacy. Thirdly, it will allow the couple to be open and get the support they need from others without feeling the need to hide anything. In that way mikveh night will become more like the wedding night – a time for celebrating (re)commitment to a loving, ongoing relationship and a chance to explore that love in whatever way feels right.

About the Author: Ayelet Reiss Nadel