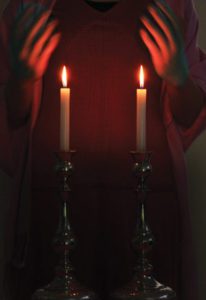 Years ago I entertained the notion of becoming a mikveh lady– but as quickly as the thought entered my head it was banished “What have I got to do with being a mikveh lady?! It’s a sacred occupation meant only for the holiest women from the previous generation, not for a ‘modern’ and young woman like me; there’s no chance I’ll ever become a mikveh lady”.

And then, two years ago, a new mikveh opened right near my home, for the first time since the neighborhood was founded 90 years ago! And since I live in one of the only neighborhoods of Jerusalem which has a tiny Ultra Orthodox population (making it hard to find the kind ofbalanit that the religious council prefers over a religious Zionist woman like myself), a friend turned to me and asked me to help out on Friday nights and chagim (Jewish holidays). At first I rejected the idea, but as time went on and she continued to pester me, I agreed to try it out. As it turns out, I really enjoy being a balanit on Friday nights and chagim, and I even feel like something’s missing when I don’t have to go to the mikveh.

Going to the mikveh on Friday night is more special than going during the week. Women come dressed elegantly and leave more peacefully than on weeknights when they are in a hurry and immediately reconnecting to the ongoing race of life, phone calls and messages. Our mikveh lays out a white tablecloth with candlesticks and a Kiddush cup and women often have a few minutes to sit down and rest before it is time to immerse. I cannot overstate the feeling of shlichut (mission) that I feel every time I recite the special prayer for mikveh ladies, where they bless all the women and thank G-d for the zechutthey have in being part purifying Jewish women.

“God help me speak softly and calmly and carry out my duty in happiness… bestow extreme joy now and at all times over all your daughters who come to get pure… may peace dwell in their homes as well as love, fraternity, affection and friendship…” It is equally hard for me to articulate the joy I have as I receive each woman with a smile, and the zechut to bless her.

After having participated in the Jerusalem Marathon one Friday morning, I was so happy I had to run to the mikveh that night;I would not have wanted to skip my shift. I always manage to be ready on time despite the many preparations for Shabbat. For so many years there was no mikveh in the neighborhood and some women postponed their monthly visit due to the great distance they had to walk; knowing that me and my fellow balaniyot are there now adds to our tremendous joy of serving at the mikveh.

While I am normally thrilled to serve as the Friday night attendant, there are times that it does take a toll on my family. A few months ago, after I had come back from closing up the mikveh, standing with Kiddush cups in our hands, we suddenly heard a knock on the door. There was a young woman, married only two months and she had arrived when the mikveh was already closed. She had seen the sign on the door of the mikveh which listed my address “In case of emergency on Friday night only”. For a split second, I debated what to do with my hungry family who had been waiting for me. I asked the young woman to wait for just a few minutes for us to make Kiddush and for me to serve the soup and went right out again to the mikveh. The newly married woman immersed and left with a big smile. Happily, I returned home but there at the entrance to my home was another lady waiting for me. It became clear to me that the sentence “in case of emergency only” has different interpretations. By the time I got home my family was fast asleep…

For those immersing on a Friday night: Firstly, according to halacha, when a woman needs to go to the mikveh on Friday night, she must do all the preparations before Shabbat. At the mikveh itself, just check one’s self (iyun) a second time. One should not even shower again before immersing. There are a few things that can still be done at the mikveh if they were not done previously (and balaniyot can help) but it is most preferable to come ready. Secondly, if a woman has a question for the Rabbi/Yoetzet she should turn to him/her before Shabbat rather than waiting with the question. Thirdly, since the mikveh is only open for a short time on Friday night, one should check out the time in advance to avoid disappointment. Finally, continue to come joyous and calm, even on Friday nights and chagim, we are there for you!