Where is God in the Mikveh?

Where is God in the Mikveh? 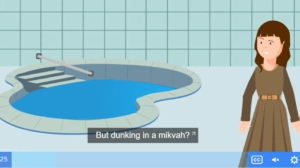 Liz Shayne recently wrote here about how the mikveh experience feels meaningless for her. It’s not anguishing, she says, but it’s not inspiring either. It’s just something that she does, out of duty. And I’ve been thinking a lot about that spectrum that she mapped out — the one that starts with “The mikveh inspires me!” and ends with “I can’t bear the thought of going there!”, with ambivalence in between — and how all Jewish women, throughout time and place, can locate themselves somewhere along that line. And how I’ve always been kind of embarrassed to admit that I enjoy the mikveh. Worried that people will dismiss me as a Pollyanna, or somehow lacking in nuance, or tone-deaf to the very real struggle that so many women endure in confronting this mitzvah.

Now, don’t get me wrong: I don’t like everything about the mikveh. For one thing, there’s the preparation. Scrubbing my ankles and clipping my nails doesn’t bother me, but making time for it in an already overloaded day, pressed between work and family demands, sure is stressful. And then there’s the awkwardness of standing there, undressed, before the mikveh attendant — trying to pretend that it’s not awkward, reminding myself that I’m an adult, that they do this every day, that we both have the same parts, but still — it’s awkward.  And then there’s the self-consciousness that comes with knowing that there are other women waiting to take their turn, so I’d better hustle. Whatever meaningful words of tefillah I might want to offer to God, they’d better total 20 seconds or less. And of course there’s the sadness —  like when I was trying to conceive a child, and my monthly visits were an unwelcome reminder that I hadn’t.

But all that being said: when I descend the steps, and the warm waters of the mikveh envelop me — that all melts away. I don’t feel stressed, awkward, self-conscious, or sad. Instead, I remember something that my kallah teacher told me: that I’m in God’s waters. And I really feel that I am.

Now, that might seem like a rather crazy thing to say. A sort of mystical, spiritual, touchy-feely, and ultimately unfounded, ungrounded thing to say. A thing that kallah teachers tell you to make you feel good. What we might, on our most cynical days, describe as an opiate. What makes them God’s waters? My mikveh is an 8 ft. x 6 ft. swimming-pool-for-one filled with chlorinated water, located in the basement of my shul. On a good day, the water is warm and free of floating hairs. On a bad day, well — you get the picture. Yes, we’re commanded to immerse. But to say that “God is in those waters”?

And yet I can’t deny my own experience: that immersing in the mikveh does help me feel connected to God. So at a certain point, I started to wonder: Was this idea really so unfounded, so ungrounded?

I started to dig. Now, for me, digging means something very particular. At my day job, I’m a writer for Aleph Beta, where I’ve spent the past three years training with Rabbi David Fohrman and learning how to read the Torah. And one of the cornerstones of our approach is to pay the most careful of attention to the particular words that the Torah uses, and to notice when a single word or phrase appears in two seemingly disparate contexts. Like noticing that the word דבה (dibah) that comes up in the story of Joseph and his brothers also comes up in the story of the spies. Or noticing that when Hagar, Abraham’s Egyptian maidservant, is sent out of Abraham’s home, she carries her bread על שכמה (“on her shoulders”)… and when Abraham’s descendants are sent out of the land of Egypt, generations later, they too carry their bread על שכמם (“on their shoulders”). When you look into it more deeply, you almost always find that it’s no coincidence, that there is a fascinating connection indeed between the two contexts, a hidden story waiting to be revealed. And when I opened up my Torah search engine and plugged in the word מקוה (mikveh), that is precisely what I found.

You see, the word mikveh comes up a mere handful of times in the Tanakh. Do you know when is the very first time that it appears?

Let me give you a hint.

It’s not in the Book of Leviticus.

It has nothing to do with ritual baths. (Not seemingly, at least.)

It’s in the story of the creation of the universe.

What, you don’t remember the part that says: “And God said: ‘Let there be a mikveh,’ and there was a mikveh, and God saw that it was good”? Just kidding. Here’s the verse.

יִקָּווּ הַמַּיִם מִתַּחַת הַשָּׁמַיִם אֶל-מָקוֹם אֶחָד
[God says:] “Let the water that is beneath the heavens gather into one place

וַיְהִי-כֵן
and it was so.

There’s our word “mikveh” — but it’s not referring to a pool where you purify yourself. It’s referring to this body of water that God made when He was creating the world.

What is the word doing here? What’s the connection between a mikveh and the creation of the world? Could this have anything to do with the mitzvah of mikveh, as we know it?

I think that it does — I think that the story of the creation of the world teaches us what a mikveh is and why it matters, and how that can affect how we think about our mikveh experience today. So I made a video with the help of my colleagues at Aleph Beta, where I expand upon these ideas more fully to really understand deeply what it means that the mikveh is “God’s water.” I invite you to check it out

The Meaning Behind the mikveh Rituals

About the Author: Beth Lesch