The Time I Said NO

The Time I Said NO 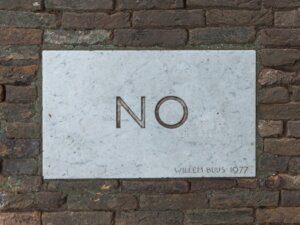 Here’s what happened.
Right before Yom Kippur I got an ear infection. It was so bad that I spent Yom Kippur in bed shaking, alternating between having the chills and sweating. (I did ask a Rav about fasting, but I am nothing if not stubborn when I want to be)
Right after Yom Kippur I found an ENT who told me what I had already assumed. “You have an ear infection,” he told me. My reaction was DUH. That is what I’m here for. So, I asked him if he could just flush it out. “Well, he said. “It is actually so bad that I can’t touch it right now, because it is almost at the canal.” So, he gave me ear drops and antibiotics the size of the Titanic. And as a final note he warned me in a voice that put the fear of God into me: “Don’t get your ears wet.”
Now, I had to go to the mikveh that day, and like I said, I go to the mikvah come hell or high water. So, I consulted my other half, and he said “Let’s just wait.” To which I responded with my typical “Ask the Rav.”
My husband reluctantly asked the Rav. I say reluctantly because he really saw how much pain I was in, and he didn’t want to be part of me having to endure more pain. (Yes, he’s a motek) The Rav came back with 3 answers to my predicament.
1)Have the balanit wet her finger from the mikvah and then stick her finger in my ear.
2)Wet ear plugs and then put them in my ears for a few days
3)Block the ear totally with cotton and oil.

I don’t know if anyone has experienced such agony and pain, but it was not like anything I have ever experienced. (Even after taking Optalgin). The pain was so bad that it totally affected my equilibrium, and when my husband came and told me the first suggestion of the Rav, that of having someone else put her finger in my ear, my response was “No!!!!!”. As in “ABSOLUTELY NO WAY would I put myself through that and endure more pain”. Even the thought of someone sticking their finger in my ear freaked me out.
Panic and pain are not conducive to making a sound and reasonable decision. Nor do they induce a state of calm and rationality. But this suggestion had triggered me! I didn’t just say no. I didn’t just scream “No.” I screamed my no for half an hour, with such intensity and passion that I more than made up for all the times I said Yes when I wanted to say No.

When I calmed down, we worked through the other 2 solutions (and eventually I did go to the mkveh based on the Rav’s suggestions), but my visceral reaction made me realize something else. Nothing is as they say in Hebrew; “Mo’ovan me’ eliav.” Nothing is to be taken for granted. In other words: Always appreciate what you have. Going to the mikveh on time is so much of my makeup (maybe someday I’ll write about it…) that I can not change that. Nor do I want to. I did however emerge from this experience with a new degree of humbleness and appreciation for all the times I went and didn’t want to.

About the Author: Tova Goldman

I am happily married to my wonderful husband and a mother to 7 amazing kids and 3 incredible sons-in-law and 2 half grandchildren. (ken yirbu). I believe in the power of humor and inspiration and have created products that will give your day a lift and put a smile on your face. I feel privileged to be able to share my thoughts about the mikveh through the Eden Center. To contact me directly send me a Whatsapp at 054-7558498