Taking Back the Waters in Chania, Greece

Taking Back the Waters in Chania, Greece 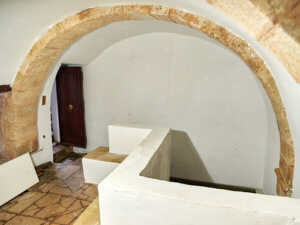 It has taken me a few years to write the account of visiting an ancient mikve in Greece, as that experience is bound up in events that happened many years earlier. I’ll start at the beginning….

Rabbi Barry Freundel was the mesader kedushin (religious master of ceremonies) at my wedding in Washington, DC, in September 1990. He had taken up his new position as pulpit rabbi at Kesher Israel Congregation in 1989, and with his deep Jewish learning and forthright personality, was readily accepted as the leader by the young congregation.

I was just starting out on my path to observance when I came into contact with Rabbi Freundel. Freundel was a good teacher and Kesher Israel was an open, accepting community of young people like myself. The community was very welcoming, and many couples actually met and married through Kesher;my husband and I were perhaps the ninth or tenth couple that year alone. In our short two-year stay in Washington, we were involved in several community-oriented projects like the formation of a Learner’s Minyan, the revitalization of the chevra kadisha, and the creation of a women’s prayer group.

Most of the young couples we knew in DC are now dispersed around the US and Israel. We have all aged, raised children, moved on. We are still in touch with a fair number of our friends, but we’ve been out of touch with Kesher Israel and with Barry Freundel since our aliyah to Beer Sheva in 1991.

There was no mikveh in Washington, when we lived there. If we wanted to use a mikveh, we had to drive 20 minutes to Silver Spring, MD, park along a dark street, walk down a dark path, and knock on a dark locked door before gaining entrance into the hidden rooms that housed the mikveh. Attending the mikveh was by appointment only. Inside, the mikveh was warm and inviting. There were plush robes to wear and personal paper slippers. Women moved through rooms with little awareness of other women inhabiting other rooms. Everything was private and clean. Because of the distance, it was impossible to use the mikveh on Shabbat. If your day to immerse fell out on Friday night, you had to wait until Saturday night to fulfill the mitzvah.

This bears no resemblance to the experience of using a mikveh in Israel. An Israeli mikveh is utilitarian with many changing/shower rooms for the large population of women who use them, including many non-religious women. There are no robes to wear in the mikvaot where I live, though they sometimes have shared plastic slippers if you forget your own. The floors are not carpeted; they are ceramic tiled for easy cleaning. In my first year of aliyah, I learned to rush ahead of the soon-to-be brides and their drum-thumping parties so I wouldn’t have to wait all night. That was before there were mikvaot especially set aside for brides. (But oh, the sweet Sephardi treats they shared with me.)

I remember the first time I was able to walk to a mikveh on Friday night. It was a horrible, swampy, moss-covered hole-in-the-wall where I emerged feeling less clean than when I had entered the water. And yet, it was exhilarating, a true emotional expression of mitzvah. Or the time I walked to that same mikveh on the eve of Yom Hazikaron, Israel’s Remembrance Day, the wailing siren a cry that carried me forward with a sense of dedication and purpose.

That mikveh closed down soon after we arrived in Beer Sheva and started our lives here. I searched for another place where I could immerse. I tried different mikvaot in many parts of the city, trying to find one I could attend regularly.

My life progressed with calm unpredictability. I gave birth to three sabras, watched them grow to adulthood, and began to focus on other aspects of my life. All of a sudden, work took a front seat.

In November of 2014, just a few weeks after Barry Freundel was arrested for voyeurism in Washington, DC, my husband Jeff and I staffed a 12-night AACI cruise to Europe. (AACI is the Association of Americans and Canadians in Israel (www.aaci.org.il), where I have worked for the last 15 years.) I calculated that I would need to find a mikveh while we were traveling between six ports of call including Venice, Dubrovnik, Chania, Corfu, and Kotor.

I was more than a little stressed by this predicament. I had been thrown emotionally by Freundel’s arrest. How could this larger-than-life man I remember as such a positive influence on me have behaved so depravedly? I did not know the women he had betrayed—violated from a distance—but my thoughts were with them. Despite my distance to the American community, I brooded over the consequences of this whole situation. More immediately, I had images of myself sneaking off from the large group we were escorting, heading down to the sea and running naked into the pitch black water while the ship slowly pulled away from me. Aahhh!

The idea of not using a mikveh was also unthinkable. It has been our practice since our marriage to renew our intimacy only after my immersion in the mikveh. If I could dash out to the mikveh just months earlier during the hard harsh summer of rockets and war of Operation Protective Edge, I should be able to find one on our cruise. (Oh, yes, try showing up at your local mikveh to find it shut tight with a note pinned to the door that read only mikvaot that have safe rooms were being used. Back in the car, back into the eerie night where all noises make you jump and finally into the brightly lit, crowded mikveh at the other end of town with women from all across the city where we laughed and giggled nervously awaiting our turn.) I needed to take back the mikveh experience from the poison with which Freundel had infected it; the experience itself needed to be purified.

Jeff and I searched for anything that might assist us. My friend and former balanit (mikve attendant) here in Beer Sheva gave us some insight into what was allowed. For example, I learned that I could wear a loose-fitting robe if I needed to immerse in a public place, much like converts wear when they go before the beit din. (Yes, I’ve been privileged to accompany a woman to the mikveh for her conversion, and those robes are thick, ugly things.) I also learned that if my seven clean days were already over, I could use a mikveh in the daytime.

As luck would have it, there is a kosher mikveh in the Greek port of Chania. Rededicated in 2000 by the then Chief Sephardi Rabbi of Israel, the mikveh stands in a non-secluded back room of the small synagogue and is used infrequently by brides and…desperate women like myself. The synagogue itself dates to the 14th century with a delicate courtyard hiding its entrance.

With no small difficulty, I kept secret from our 160-strong group of travelers that I was waiting for them to vacate the synagogue so that it could be locked while I used the mikveh. Our large group was broken into three smaller groups so as to allow for everyone to fit into the synagogue in a rotation of sight-seeing.

Thankfully, the island of Chania is small enough that I was able to both accompany my group and rush back to the synagogue to check on the mikveh’s availability.

Finally, I was ready to do what I’d come for. I removed the guard rail that prevented people from going down into the water. I folded my clothes and placed them on the stone shelf. I put my towel out so that it would be waiting for me when I emerged. Then I dipped my toes into the water. This water was cold. I walked down two steps, and with water at my calves, I stopped. The water was so cold I was breathing erratically to try and calm myself. I took another step down. Maybe if I splashed water on my legs and arms, it would ease the immersion. Another step. It was now up to my knees. I can’t do this, I thought. It was so cold that I was actually hyperventilating. How was I going to immerse my whole self in this water?

I looked around at the simple stone room, the ancient steps on which I was standing. This was not just some archeological find, dusty with age and presented as an exhibit of ancient Jewish life; this was a working mikveh with clean, pure mayim chaim, living waters. How blessed I was to be using an historical mikveh as it was intended. I was there to purify myself in these freezing cold waters and I was going to do this. It was all or nothing. I descended two more steps then plunged myself into the coldest water I have ever felt. Three times I immersed myself, three times I emerged shivering and shaking. And it was done.

Now that I’ve aged sufficiently, it has been more than a year since I’ve had to use a mikveh, but this experience stands out in my mind as one of the highlights of my married life, more powerful than when I used the plush, fancy redwood mikveh of San Francisco, or the intimacy I felt in the house in Silver Spring. It was a moment where I acted for myself, where I rededicated myself to the use and meaning of mikveh, where I brought life to an ancient stone structure that has been a feature in the Jewish life cycle since the first century. I took back what was mine from the hands—and eyes—of those who chose to defile this experience.

And when I emerged into the sunny November afternoon on an island lapped by the gentle swells of the Mediterranean, my charges no more the wiser, I was exultant. 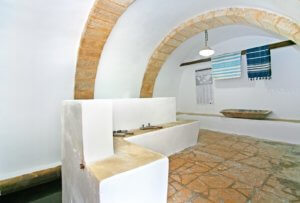 About the Author: Miriam Green