From Passive to Active – Esther as a Role Model

From Passive to Active – Esther as a Role Model 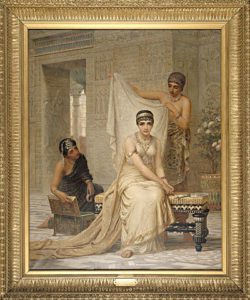 Megillat Esther is stark, even brutal, in its description of Esther’s lack of agency at the beginning of the Purim story. The steady drumbeat of passive verbs describing what happens to her makes us aware of her status as a pawn throughout the 2nd and 3rd chapter of the Megillah. Using a passive form in Hebrew is an intentional choice that shrinks the action in the story; consider the difference between “I broke the vase” and “The vase got smashed.”

Esther also follows the instructions of the director of the women’s harem. ויבהל תמרוקיה לתת לה  – Hegay, in charge of the women brought to the palace, gave her the cosmetics and servants – and Esther followed his beauty regimen precisely – לא בקשה דבר, כי אם את אשר יאמר הגי סריס המלך שומר הנשים. In what might have been even harder than her physical limitations, Esther was limited in speech – she did not disclose her lineage, as instructed by Mordechai:  אין אסתר מגדת את מולדתה ואת עמה כי מרדכי צוה אליה אשר לא תגיד. In fact, the Megillah tells us that she chose nothing freely, but followed Mordechai’s instructions exactly, as if she still lived under his roof: ואת מאמר מרדכי אסתר עושה כאשר היתה באמנה אתו

Lest we think that the fate of a Jew in Persia was to be buffeted by external events, the Megillah opens the next chapter with the story of Mordechai’s refusal to follow orders. He did not bow down to Haman despite the command to do so from the king וכל עבדי המלך אשר בשער מלך כורעים ומשתחוים להמן כי כן צוה לו המלך ומרדכי לא יכרע ולא ישתחוה. Thus, the Megillah sets up a blaring contrast. It tells us of Mordechai’s proactive decisions, questioned by his peers in the gates of the king who asked him why he directly opposed the king’s command –למה אתה עובר את מצות המלך?, unlike Esther’s acquiescence.

All this, of course, sets the stage for the climax of the narrative, the moment when Esther turns 180 degrees and takes charge not only of her fate, not only her nation’s fate, but the fate of the empire. When Haman’s evil decree against the Jews is publicized, Mordechai sends Hatach to command Esther to beg Achashverosh to rescind it:  לצוות עליה לבוא אל מלך להתחנן לו ולבקש מלפניו על עמה. When Esther initially – shockingly – refuses his command, she uses the language of command as well –  ותצוהו אל מרדכי to communicate her refusal to Mordechai. Esther’s transition is evident when, after Mordechai again sends Hatach to convince Esther to beg Achashverosh, she creates her own plan. Instead of following Mordechai’s decree, she commands Mordechai to follow hers, using the grammatical imperative lech: לך כנוס את היהודים הנמצאים בשושן וצומו עלי . . . This striking reversal of roles is complete when the Megillah tells us the Mordechai followed her commands exactly, just as she used to heed his: ויעש ככל אשר צותה עליו אסתר.

The rest of the story is, of course, history. It is the personal transformation of the heroine Esther – from a passive pawn to an active strategist – that saves the Jews. Similarly, it is Esther who is the driving force behind the establishment of the annual holiday to celebrate the remarkable victory. Despite the fact that both Esther and Mordechai wrote the letter to the Jewish communities about Purim, the verb chosen by the Megillah is the female singular : ותכתוב אסתר המלכה בת אביחיל ומרדכי היהודי את כל תוקף. The Megillah’s language highlights for us how Esther, no longer a victim of history, is the driving force behind Purim.

Esther’s initiative serves as a model for us in halakha. A woman in most judicial systems could not be considered a legal entity separate from her husband. She therefore had no legal rights against her husband. By contrast, there are remarkable examples of the agency granted to women in the Gemara, especially in regard to sexual ethics and mitzvat Onah.  Likewise, the halakha recognizes the power of a woman’s statements regarding Hilkhot Niddah; the Shulchan Arukh asserts that a woman who says that she has immersed in a mikveh is trusted – ומכל מקום כשאומרת טבלתי נאמנת. Indeed, all of her actions in regard to niddah and mikveh are considered trustworthy, or in halakhic terminology אישה נאמנת.

Whereas many women in history were passive, told or commanded how to act, women today have evolved into more active players. For centuries, even in the realm of mikveh women did not actively take leadership.  Today women have begun to take back the keys and are reclaiming the mitzvah as their own.  Some work to this goal by redesigning and improving the physical mikveh space, some by writing tefillot or thinking about how they can enhance the ritual aspect, some by learning the laws and becoming yoatzot halacha, and others by owning the mitzvah of immersion and exploring creative ways that halakha allows them to make it more comfortable and meaningful.  The leadership of women in around mikveh and hilkhot niddah is a crucial part of the landscape today.

Reading the Megillah, my heart goes out to Esther in the palace; how lonely and afraid I imagine her to be without family, identify or free will. Her subsequent choice to choose, to take risks and to lead serves as a lesson to us all to find space in our lives – in our halakhic observance, in our communities, in our families and workplaces – to make conscious and deliberate decisions that we feel will bring salvation and redemption.

About the Author: Atara Segal

Atara Graubard Segal has taught Tanakh, Jewish law and math to teens in New York, Houston and Los Angeles. She is currently studying to become a Yoetzet Halacha in the Keren Ariel program at Nishmat while on sabbatical from Shalhevet High School in LA.