Niddah in Sickness and in Health

Niddah in Sickness and in Health 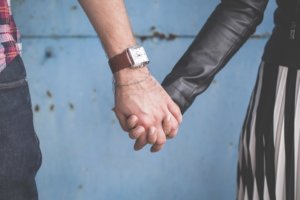 Michal was returning from a work conference in Carmiel when a vehicle crossed into her lane and smashed head on into the car.  Luckily, she was wearing a seat belt, the airbags had deployed and help arrived quickly. After almost a week in the hospital, she was prescribed pain medicine and discharged home to her husband’s care with 4 broken ribs, a spleen laceration and multiple pelvic fractures. Two days later, she got her period and called in a panic realizing that her husband could no longer touch her.  “How will I care for myself over the next twelve days? Will my four-year-old son be able to help me dress? Who will hold my hand when the pain medicine wears off?”

When a woman is sick, she may require her husband’s touch for assistance with activities of daily living such as getting dressed, getting up from a chair or walking with assistance.  But she may also need his physical touch to relieve pain or anxiety. We are slowly beginning to discover the power of human touch to heal the mind and body.

Touch has been shown to cause faster growth in premature babies, reduce pain, decrease autoimmune disease symptoms, lower glucose levels in children with diabetes, improve the immune system in people with cancer and increase wound and fracture healing, and reduce stress. Wounds take a day longer to heal when the patient has quarreled with her partner, and in less-happily married couples, wound healing takes two days longer.

The mechanism by which touch improves health is not known.  Current clinical trials are assessing the impact of touch on halting cancer progression.   Although these studies may take many years to mature, several prestigious hospitals in the United States have begun to offer treatment with healing touch therapy.  Yet, not all touch is equal. The greatest reduction in pain occurs with a partner’s touch when compared to the touch of a stranger. While a stranger’s touch provides momentary comfort, a spouse’s touch can communicate love, compassion and intimacy nurtured by years of caring and closeness and thus more profoundly impacts health and well-being.

Perhaps one of the greatest challenges in niddah is the prohibition of touching or even passing objects from hand to hand to prevent touch.  Observing these prohibitions is even more difficult when a spouse is ill. Shulchan Aruch Yoreh Deah 195:16 very clearly states, “If a woman is sick, and she is a niddah, her husband is forbidden to touch her in order to attend to her, such as to lift her up, lay her down, and cover her.” Shulchan Aruch’s restriction on all touch when the wife is ill sounds unequivocal. Let’s explore the parameters of this prohibition, and where there is room for leniency.

Poskim distinguish between a situation when the husband is ill and when a wife is ill based on the assumption that men tend to have stronger sexual desire than women.  When the husband is ill, there is more room for leniency for the wife to care for him than when she is ill. When he is ill, halakha assumes he will not have the strength or desire to touch her and there is no concern that she will touch him in a sexual way.  But when he is well and she is ill, he will more likely be overcome by desire and touch her. Hence, he may not attend to her even if they are in a public place such as a hospital room, even though other men may tend to her needs. Why is the prohibition against the husband more severe than the prohibition against other men?  Rav Moshe Feinstein answers that for a husband, any contact with his wife will arouse desire as it occurs in the larger context of intimacy within their marriage and can communicate more than just fleeting physical contact. For this reason, holding her hand when she is in niddah is generally considered problematic. However, when other men touch her, they are less likely to be aroused -especially since their touch is not rooted in love and is intended purely to help her heal.

Does the prohibition to touch apply even in a situation of life-threatening illness (pikuach nefesh)?  Rambam writes that touch when the wife is a niddah violates a Biblical prohibition against forbidden sexual relations (gillui arayot), which even overrides the obligation to save a life.    There is disagreement over how to interpret Rambam and the type of touch included in the Biblical prohibition.  According to Beit Yosef’s interpretation, there is no touch between a husband and wife that is non-sexual and this prohibition applies to all contact, even if the wife suffers from a life-threatening illness and there is no one else to care for her. Thus, in a life-threatening situation, Shulchan Aruch, it seems, would forbid all touch whether sexual or non-sexual and even forbids a husband who is a physician from listening to his wife’s heartbeat with a stethoscope. Shach disagrees and argues that not all touch between a husband and wife is sexual. Therefore he limits Rambam’s biblical prohibition only to sexual touch; non-sexual touch violates a rabbinic prohibition, which may be overridden by the obligation to save a life.  Although the definition of sexual touch is not uniform, virtually all poskim would consider holding a wife’s hand a form of sexual touch. Ramban goes one step further, stating that the entire prohibition against touch, sexual and non-sexual, is rabbinic and suspended by the obligation to save a life. Thus, in a situation of life-threatening illness, Shach and Ramban would permit non-sexual touch.

Rema offers an additional leniency in a time of danger, “There are those who say that if there is no one else to attend to her, it is all permitted, and this is our custom, if there is a great need.”  Rema bases this opinion on Radbaz who offers the following guidelines: if the wife is sick, the husband is obligated to hire someone to tend to her needs. However, if no one else is available, he may help her.    Depending on the wife’s specific needs, a child may be considered a viable caretaker filling the role of the husband. Radbaz extends this leniency to even a non-life-threatening illness for two reasons. First, failure to tend to her in a less serious situation, could lead to a life-threatening condition and second, it is impossible to determine when a less serious situation will deteriorate into a life-threatening situation.  If the husband is a physician and his wife is in niddah, Pitchei Teshuva, offers another leniency, permitting him to examine her with a cloth interposed between his hand and her skin to eliminate any direct contact. Rav Shmuel Wosner, in his Shevet HaLevi, goes so far as to say that if no one else is available, the husband may perform any and all tasks for her.

In Darchei Moshe, his commentary on the Tur, Rema quotes the passionate position of Shiltei Giborim who states, “Those men who avoid touching their wives when they are ill engage in chasidut shtut, false piety.” However, Shiltei Gibburim does not specify which forms of touch husbands should perform when the wife is ill.

As we see, the halakha has nuances and a range of opinions. A sensitive halakhic authority will know how to evaluate the specifics of the situation in light of the range of halakhic possibilities outlined above, and perhaps in the future — if current studies confirm that a spouse’s touch significantly reduces pain and analgesia use and improves medical outcome — poskim will take these medical conclusions into account as well.