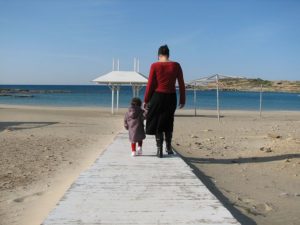 (Note: although this article refers to mothers and daughters, much of it applies for fathers and sons!)

I was waiting at the obstetrician the other day, and struck up a conversation with a heavily pregnant lady waiting alongside me. She mentioned her eldest daughter had asked her how the baby gets in to her body. She looked a little awkward, and admitted she wasn’t sure how to answer this question.

I asked her if she had talked to her daughter, who was about 8, about puberty and getting her period yet, and she also admitted she had thought about it as she had heard girls are getting them earlier these days, but hadn’t approached it yet. I mentioned maybe those topics could go together, for example, that when a girl get’s her period, her body is becoming grown up, like a mummy that can have a baby. She made no reply to my suggestions and then a few minutes later she was called in to the doctor. I was left wondering if the silence following my “idea” suggested the conversation may have come to an end even if the doctor hadn’t called her.

This awkwardness in talking about these topics is not rare, and is largely due to the fact that mom or dad’s own parents never spoke to them about their changing bodies. (I want to stress no one is to blame here, I am just noting a phenomena I have come across.) Discomfort passed on through the generations.

I have more often though, encountered young women in my therapy room who were at the other end of the “awkward silent mother” syndrome. Some repercussions described by daughters of mothers too uncomfortable to talk about body stuff include:

Although these examples go beyond the conversation of getting one’s period, it seems once there is a culture of silence in the relationship, it only continues to grow and penetrate all such related topics.

Are parent’s worried that if they explain the biological reason behind the period (not just “dealing” with the physical side) they will awaken a sexual monster that just won’t go back in the box? That they will arouse a curiosity in the child towards the opposite sex that otherwise would never have come about until dating years? Are they hoping that they can keep their child “childlike” and prepubescent in their minds whilst their bodies are raging with hormones?

I have spoken to girls whose first knowledge on the topic of menstruation came when the school nurse talked to them about their periods, along with a demonstration how to put on a pad. They weren’t provided with any information about their body systems, or why their periods were coming, nor were they taught that getting one’s period means they have the potential to fall pregnant. This strikes me as irresponsible and, dare I say, controlling. The message it sends is YOU ARE NOT TO BE TRUSTED WITH YOUR OWN BODY. Have you heard of the self fulfilling prophecy?

Even less helpful are the girls who first learn about their cycles from movies, or from friends – information that is not always reliable. The shock of unfiltered exposure (and incorrect information) can be worse and has the potential of turning a positive part of life into something overwhelming and possibly associated with guilty or shameful feelings.

Mother’s choosing not to talk about the topic of body changes sends a message to their daughters that this topic is NOT OKAY TO TALK ABOUT. The risk here is that normal feelings or concerns might be kept inside, boundaries may not be clear, and the possible resulting difficulty in sharing or expressing oneself in these areas might remain limited, as would be finding healthy solutions. Being able to discuss such things openly could easily shed light and simplify things that seem overwhelming, and even save a marriage. The physical component may have been dealt with superficially but what of the world of emotions and personal experience? How will they learn to develop emotional intimacy with their partners if they can’t have a safe space to discuss difficult topics with their own mothers?

By embracing these changes in your daughter, there is a wonderful opportunity to foster connection between you and your daughter, especially now that your daughter is beginning to pull away from the family and deepen her connections with her peers. Menarche is a vital part of the life cycle, a time to be in wonder and awe at the beauty of nature, when exciting changes are happening to girls, who are becoming inheritors to amazing powers of creation.  Awkward as these conversations may be for both of you, your daughter wants and needs the information from her mom; you get a chance to make her feel normal, safe, grown up, and proud of herself. You also get to share your own experiences with her, letting her know that you do understand. You too have had similar experiences. She is not alone.

It is a chance to become closer with your child, to position yourself as her confidante, letting her know that you are open to any questions or concerns she may have. . Show her you are comfortable and low key with these issues, and she’ll come to you with more of her secrets and questions. Share your own experiences with her.

Ok. So say you are fine in talking to your daughter. The next question might be how much information to reveal?

First, I raise my children by always naming body parts correctly when they are young. There are many important reasons for doing this, one being that we know these parts exist and are there to talk about at the appropriate times.

Give your child as much as she feels comfortable with, and is curious to know. If a simple answer suffices (“How does a baby come out? ”The right way”); yet sometimes this kind of answer simply leads to more questions. I used a story-like element for both simple and complex concepts. I take it slow, looking vigilantly for the moment where they seem satisfied with what I’ve said thus far, as though they “get it” and are absolutely no longer interested in the topic (hopefully without turning them off). I have found at this point the answer is satisfactory and keeps them going for a long time.

Personally, my daughter asked when she was 6 years old about a sanitary pad she found in my bag, (“why is there a little diaper in your bag?”). I explained to her that every month, a woman gets an egg — a potential baby. Either the egg will become a baby, or it won’t. Either way, the body gets ready for a baby, and needs prepares a special place for the baby to live, with a cosy bed, with blankets and pillows and food,while it lives in the mummy’s tummy. If the egg becomes a baby, it uses those things, but if not, the egg and pillows can come out of the mummy. It looks like blood, there is blood, but doesn’t hurt. The little “diaper” we call a pad, keeps my underwear clean when this happens. I importantly explained she will also start to “bleed” when she is a bit older, too, just like me. I told her where it comes out from, where they baby comes out. I was 12, when I got my period, I told her. She smiled and said “oh I get it”. And that was it. No more questions for a few more years.

When I became pregnant, when she was 9, she asked how the baby gets inside. She wanted to know how it all works and wouldn’t let up (remember like I said, it’s a personality thing). I had explained carefully that a part of the baby comes from mummy’s egg (remember she already knew about women having eggs from our period talk, I reminded her) and a part from comes from Abba and part from Hashem. But now she wanted details. I was careful and kept it true choosing to focus on the biological concepts. Obviously being truthful is the foundation for building trust in relationships, and particularly in the primary relationship with the parents.
I explained the Abba has to give the Mommy special magic liquid full of little tadpole creatures, one of which will be the one to make half the baby, and these tadpoles have to swim to the egg and fight to win, to be the one to join the egg and make the baby. When one wins and meets the egg, the baby can start growing. She asked “how does Abba give it to you?”, then she smiled and added, innocently, “do you need to have your clothes off”, to which I replied “maybe”. There was a pause, I could see her mind ticking and then “Oh ok, I get it”. Game over. I never know when that moment of “Oh I get it” will come, but I try to not “overdo” it and hope it comes sooner than later. Keep in mind that vivid imagery works for my daughter – it might not for every child. Books or pictures may work better for some children. Basically, adopt a matter of fact about sexual/reproductive topics, use sensitivity, and your child will likely accept the information the same way she/he learns other facts about life.

I hope we can see this area open up to ensure safety, trust, connection and conversation. We cannot abandon our youth to deal with these issues alone–and when we do, we often leave therapists, educators, the beit din, family members, and children to pick up the pieces. So as I engaged the woman in the doctor’s office, I hope we can all embolden ourselves to engage in this meaningful conversation with our own children.

About the Author: Sharni Brodesky

Sharni Brodesky is an Australian-trained psychotherapist with over 17 years of experience in child, adolescent and adult mental health. She has worked in a variety of settings and specialises in adjustment and transitions, including all of life's stages, from childhood, to marriage to parenthood, as well as immigration adjustment. Sharni made Aliyah with her family in 2013 from Australia and currently works in private practice at “The Place”, Jerusalem, running groups on transformational parenting based on the Nurtured Heart Approach and Culture Shock workshops at the AACI.