A Message From the Train to Auschwitz

A Message From the Train to Auschwitz 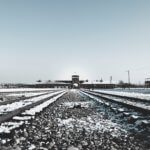 I live in Elazar, one of the Yishuvim of Gush Etzion. This summer we will celebrate 10 years of Aliyah, and I am often teased by my sister that I live on another planet, Planet Israel. We made Aliyah ready to live the dream.  A dream that my grandparents almost 80 years ago at Auschwitz’s gates, could not have even thought to dream of.

You see on my planet, I live in a Jewish State, a religious community, and a hub of growth and religious development. I am blessed to run the mikveh on our Yishuv, and as I turn the key of the mikveh doors the reality of where I am and the piece of Jewish history that we are writing is never lost on me.

But, on most days, we go about our normal everyday lives. Work, errands, pick ups from school, etc. Amongst my normal are often Whatsapps from brides I’ve taught over the years, or women from the community checking in with questions or concerns. It has become the norm for me to have one of the Yoatzot Halacha that live on our Yishuv answer timely questions while I’m sitting in the carpool line.

One evening a bride reached out to me late in the evening. I quickly sent a Whatsapp to one of our Yoatzot, and despite the late hour was surprised to not hear back. Nechama Goldman Barash usually makes herself available, and happy to help even at late hours.

In the morning I woke up to a Whatsapp from her. She was in Poland leading a heritage trip. She was Whatsapping me from Lodz, inside the Yeshiva of Lublin with her answer.

And there I was again, in Planet Israel, having a moment that my grandparents hadn’t even known to dream about.

Almost 80 years ago, on the train to Auschwitz, my Baubie Judy was having her last few moments with her mother, Yehudit Nuszen Z”l . Her mother explained to her that she was young and would survive, and before she would meet her own fate, she needed to tell her something important. In those last moments she told my Baubie about the place she had taken her and her siblings every month. She explained that it wasn’t a bath house but a Mikveh, a place of ritual purity. She placed the mitzvah of Taharat Hamishpacha, the center of a Jewish home, in my grandmother’s hands and told her that she would survive to keep this mitzvah alive.

And she did, and on her shoulders, I stood in my home in Elazar, Gush Etzion, in our Jewish state with my cell phone in hand as Nechama’s Whatsapp answer reached across the ocean from the place of destruction to the place of Jewish future.

We are living in amazing times…

Send us your family’s story!  info@theedencenter.com

About the Author: Rena Glazer

Rena, a native Chicagoan, made aliyah with her husband in 2008. She has been working with nonprofits for the past 15 years in New York, California, Gush Etzion, and Jerusalem. Rena is a Yeshiva University graduate with additional advanced certifications from Beit Issie Shapira Hydro Therapy program, YU and Machon Puah Kallah teacher course, MATI business course, and Mercaz Eden advanced Kallah teacher training course. Rena is also the former director of the Elazar mikvah in Gush Etzion. Rena lives in Elazar, Gush Etzion with her husband and 4 beautiful children.