Honoring the Strength of Women During the Shoah

Honoring the Strength of Women During the Shoah 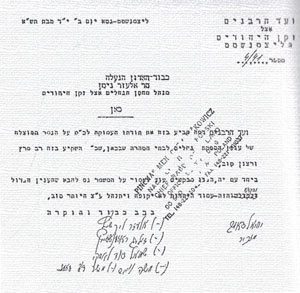 On the eve of Holocaust Remembrance Day, The Eden Center wishes to salute the courage and heroism of women during the Shoah, when Jewish existence was threatened both physically and spiritually. Though this blog is not an exhaustive examination of the topic, it is meant to join the conversation in an attempt to pay respect to those who endured the suffering and thereby fought for the physical and spiritual survival of our nation.

The story of the 93 young women, all students of Sarah Schenirer, who took their own lives rather than be subject to rape at the hands of the Nazis is well known:

“We are girls between 14 and 22 years of age…Yesterday and the day before we were given warm water to wash and we were told that German soldiers would visit us this evening. Yesterday we all swore to die. Today we were all taken out to a large apartment with four well-lit rooms and beautiful beds. The Germans don’t know that this bath is our purification bath before death…”1a

Over the years, this story has been both sensationalized and discredited as historically inaccurate by many scholars and by institutions such as Yad Vashem. Judith Baumel and Rabbi Dr. JJ Schacter, who have studied stories of Jewish martyrdom, conclude that this story is  “an archetype, one of the most

The Greeks outlawed circumcision. Nonetheless, Jewish women, at the cost of their lives, made certain their sons were circumcised according to the law.

During the Holocaust it was difficult and out-right dangerous for women to observe the laws of family purity. As we chronicled in a previous article, the Nazis banned the use of Mikvaot, and women had to go to great lengths to use them at all, sneaking out of the ghetto to use rivers in neighboring towns or traveling to secret mikvaot.

The Nazis murdered approximately two million Jewish women; they were specifically targeted as they represented the future of the Jewish people.

The story of the girls typifies just one of the uniquely female decisions made under Nazi rule. Emmanuel Ringelblum, a historian in the Warsaw Ghetto, wrote: “…The future historian will have to dedicate an appropriate page to the Jewish woman in the war. She will take up an important page in Jewish history for her courage and steadfastness. By her merit, thousands of families have managed to surmount the terror of the times.”2

In Germany, after Kristallnacht, about 30,000 Jewish men had been arrested and sent to concentration camps. It fell to the women to free their husbands; these women were told that their husbands would only be released if they had emigration papers. Ruth Abraham used her Aryan looks to travel to Dachau on a bus filled with SS men, requested an interview with the camp commandant to beg for her father-in-law’s release. After three days, she succeeded. 3 The testimonies of both men and women emphasize the stoicism of women during the aftermath of Kristallnacht: “The highest praise…goes to our wives who, without shedding one tear, inspired the hordes, some of whom had beaten their men bloody, to respect them. Unbroken, these women…did everything to have their men freed.”4

In many of the ghettos, as in Germany, men avoided the street, where they were rounded up and sent for slave labor. It therefore fell to the women to support their families, thus creating a role reversal. Cecilia Slapakowa writes of women in the Warsaw Ghetto,

Women’s individuality, so long hemmed in by ethical-cultural norms, has now become [a source of dynamic strength]…It is important to remember that the Jewish woman wants more than to simply “endure.” She also wants to construct the foundations for the future socio-economic rebirth of our people…She is an imparting ray of hope and courage into our dull and dark life, a touch of humanity and…even heroism. 5

During the Holocaust, when the very existence of the Jewish people was threatened, the women once again assumed the responsibility of the Jewish future. The story of the ninety-three Bais Yaakov girls, true or untrue, like the story of Ruth Abraham and the women in the Warsaw Ghetto, typify the unique dignity of Jewish women. Their courage came in different forms: resistance of intercourse with Nazis (and sometimes even suicide to prevent it), using the mikveh when possible, continuing to have intimate relations with husbands, and bringing a family into the world despite the challenges. This fortitude, resilience and strength is a repeated story, and especially on Yom HaZikaron L’Shoah U’LeGevurah, deserves its own page in history. In their merit may we have the courage to sanctify our own sexuality and make informed decisions about what is right for our bodies and relationships.

1a. Quote from the letter sent in Yiddish from Chaya Feldman, one of the ninety-three girls in Cracow, to Meir Schenkolweski, secretary of the World Beth Jacob Movement.

3. Kaplan, Marion A. Between Dignity and Despair: Jewish Life in Nazi Germany. p. 127.

About the Author: Lani Lederer Berman

Lani Lederer Berman received her MA in Holocaust Studies from the Institute of Contemporary Jewry at the Hebrew University of Jerusalem. She works as a Museum Educator in the Holocaust History Museum of Yad Vashem. Lani is also certified as a Madrichat Kallot through the Moetza Datit of Gush Etzion and a graduate of the Eden Center's Advanced Kallah Teacher Course. Lani lives in Alon Shevut with her husband and two children.