In my line of work as a tour guide, I am constantly amazed and inspired by the “life” Torah has in the land of Israel– the words, messages and culture of the Torah are constantly being contextualized and internalized .  Archaeology plays a tremendous role in explaining our texts and customs and ancient mikveot are but one example of the land and its relics serving as helpful commentaries to our studies.

In the 8th chapter of Mishna Shekalim, the mishna asks about the status of utensils that are found outside a mikveh. The mishna debates whether these items are pure or impure, and Rabbi Meir answers that it depends on where they are found: דרך ירידה לבית הטבילה, טמאין, ודרך עליה טהורין, שלא כירידתן עלייתן. . . (on the way to the mikveh are tumeh, and on the way from the mikveh are tahor, for they weren’t carried on the same path to as they were carried from the mikveh.)

Unlike our current inclination to be machmir about things that are unknown, Rabbi Meir says ‘see what information you have and decide based on that’. If the vessels are on their way down to the mikveh, then clearly they have not been immersed yet and are impure. And if they are on their way up, they have been purified and you should feel free to use them.

The mishna assumes that there are two ways to approach the mikveh, one going in and one coming out. The Korban HaEdah explains that there was an entrance and an exit to the mikveh so that the impure would not touch the pure and thereby render them impure as well.

However, as much as the principle was grasped, it was only made real in the last few decades with the discovery of mikveot from the Second Temple period. Today most Israeli children can identify an ancient mikveh; fifty years ago these had not yet been unearthed. As they were discovered, some mikveot clearly had a divider down the middle of the stairs – not a wall per se but enough of a marker to keep people from bumping into each other. A famous example is this one at the southern edge of the Western wall: 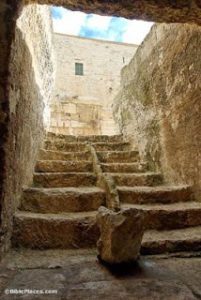 The most spectacular example of this phenomenon was discovered on the ancient Derekh haAvot, the Path of the Patriarchs. This was a route that went along the mountain ridge from Beersheba to Hebron, to Jerusalem and north to Shechem. Because that is the route most often used by Avraham, Yitzchak and Yaakov, it received the name Derekh HaAvot: 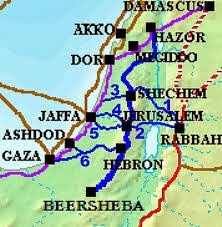 Part of this ancient road has been exposed in today’s Gush Etzion, between Alon Shvut and Neve Daniel. And on this road was discovered an enormous ancient mikveh with two beautiful openings: an entrance and an exit: 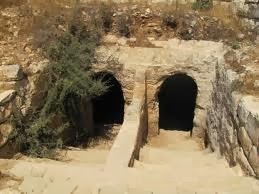 Scholars assume that as this mikveh was literally on the road, less than a half-day’s walk to Jerusalem, it was used by olei regel, pilgrims coming to the Temple who needed to purify themselves. An added advantage to dipping here, as opposed to in Jerusalem, is that by the time you arrived in Jerusalem it would be nightfall and you would be pure (if you needed והערב שמש).

I love this mikveh for many reasons but especially because this is one of the first sites that I saw that really emphasized to me the concept of אין תורה כתורת ארץ ישראל, there is no Torah like the Torah of the land of Israel and seeing is not only believing, but also understanding.

The Eden Center is excited to invite people in Israel on January 26th to feel some of  the excitement when we spend some time touring and learning at an ancient mikveh.  Though Shulie won’t be with us, her colleagues Shani Taragin and Esti Herskowitz will be and we will see and understand first hand the archaeological evidence and the historical ramifications learned from these ancient artifacts that highlight the life of Torah in Israel.​  Email info@Theedencenter.com for more information on the hike.

Parts of this blog are excerpted from Shulie’s Daf Yomi blog Off the Daf and Into Israel, A look at the realia of the daily daf, based on the archaeology and nature of the Land of Israel.  Shulie has a Masters Degree in Jewish History and has been guiding families, synagogues, adult education courses and more for almost twenty years. Her email is shuliemishkin@gmail.com and her website is www.shuliemishkintours.com.

About the Author: Shulie Mishkin

Shulie is an experienced educator and tour guide. She has a Masters Degree in Jewish History and has been guiding families, synagogues, adult education courses and more for almost twenty years. Her email is shuliemishkin@gmail.com and her website is www.shuliemishkintours.com