Chanukah and Mikvah: Does it Matter Which Comes First?

Chanukah and Mikvah: Does it Matter Which Comes First? 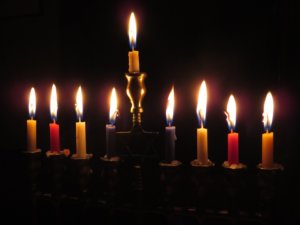 Several questions regarding the timing of woman’s tevila arise when she has to go to the mikvah during Chanukah: What what takes precedence; candle lighting or immersing in the mikvah? Does candle lighting affect when she prepares for the mikvah? And how can she juggle these obligations with the parties and other goings-on?

We will look briefly look at each of these issues:

Chanukah candles are ideally lit as soon as nightfall begins in order to fulfill the condition of parsumei nissa (publicizing the miracle) while people are still outside. This is explained by the Tur and Shulchan Aruch (Orach Chayim תרעב:א) as the end of sunset, or tzeit hakochavim, although many Rishonim rule that candles may be lit at the beginning of sunset (see Mishnah Berurah 1, and Be’ur Halacha). Whether at the beginning or end of sunset, it is clear that one should ideally light Chanukah candles early in the night — though lighting anytime in the night is valid bediavad (Shulchan Aruch 2).  Hence you should light candles before going to the mikvah, even if your usual minhag (custom) is to immerse as soon as possible, so as to fulfill the mitzva of ner Chanukah in its most ideal form, while not diminishing from the tevila.

There are other traditions that also come into play with regard to lighting candles. In Sefardi tradition, the family lights one Chanukiah, while many ashkenazim light one Chanukiah per person. In addition, many families try to light all together. So if you are planning to light with your husband, who only comes home from work late — and the mikvah will be closed by that time — then immerse first. Likewise, if you come home late from work, and lighting the candles will make you miss the time the mikvah is open, go to the mikvah before lighting.

As far as when to prepare, there is debate among the early medieval rishonim as to when a woman should perform a chafifa (thorough body preparation before immersion) in general. The Sheiltot (based on a passage in gemara Nidah 66b) rules that a woman should preferably prepare for the mikvah after nightfall so that it is as close to her immersion as possible. Rashi, by contrast, argues that there is concern that should a woman wait to prepare until nightfall (when she is already able to immerse), she might rush through the preparation in order to immerse as quickly as possible and be permitted to have physical contact with her husband once again. Rashi therefore maintains that it is best to prepare for the mikvah during the day to ensure that one does a thorough and careful chafifa. The gemara is inconclusive on the matter, ruling both “the halacha is a woman should prepare during the day and immerse at night, and the halacha is a woman should only prepare at night,” and thus left the question open for the later talmudic interpreters to debate.

The Shulchan Aruch (Yoreh Deah 199:3) rules that the essential law follows the Sheiltot, and the proper time to prepare is at night. However, he advises that it is a “proper custom” to try to fulfill both opinions: to start preparing while it is still day and continue until after nightfall. R’ Moshe Isserlis, in his notes on the Shulchan Aruch, adds that either option is valid and one may prepare either during the day or at night, as long as it is not rushed (and if done during the day one quickly checks her body at nightfall and combs her hair before the immersion. See Taz 6).

During Chanukah – just like any other day – if one is able to start preparing during the day and continue until nightfall that is ideal. If that is not possible, prepare at any point during the day or at night. In the event that one will be immersing on Friday night of Chanukah, this is no different than any other Friday preparation. According to all opinions, on Erev Shabbat one may only prepare for the mikvah while it is still day and complete all preparations (aside from checking the body) before the onset of Shabbat.

From a practical point of view, if there are conflicting demands on your time like family parties or community celebrations (which abound during Chanukah), consider doing some things either at any point during the day or the night before – like removing nail polish or for those who immerse with polish, getting a fresh manicure; cutting your nails; shaving; removing dry skin — whatever can be done a little in advance. You can also take a shower instead of a bath — or bathe leisurely the night before and quickly shower just before immersion.

Some women might be inclined to push off immersion if they have other Chanukah related obligations on mikvah night. But you don’t need to feel like that is your only option, and certainly halachically it is preferable to go on the correct night. Figuring out a fun excuse for how to leave a party or family event* can be part of the “excitement” that you build with your husband, and doing it without getting “caught” can actually heighten the anticipation.

*We’d love to hear some of the ways you have handled these kinds of situations — when you have had to get out of a party or family event to sneak out to the mikvah. Send your “experiences” to info@theEdenCenter.com (titled Escaping to the mikvah) and we may include them in an upcoming post.

Dr. Shana Strauch Schick has PhD in Talmudic Literature from Bernard Revel Graduate School at Yeshiva University where she also completed an MA in Bible and studied in the Graduate Program in Advanced Talmud at Yeshiva University from 2002-2007. She teaches at Midrashot in both Israel and abroad, and is a research associate at Machon Schechter Institute in Jerusalem. She is completing her book Intention in the Babylonian Talmud: A Study in the Development of Rabbinic Jurisprudence.