With the Cup, I Almost Look Forward to Having my Period

With the Cup, I Almost Look Forward to Having my Period 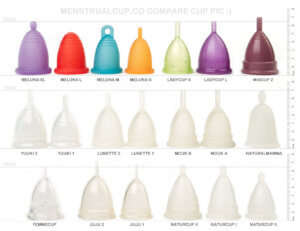 In response to Chen Tamir’s post from a few months ago, What Are Period Panties?, I’ve been thinking a lot about the concept of “period 2.0” (though if you think historically, it’s probably closer to 6.0, or more!), and about those “period panties” (that are always showing up in my Instagram feed).

As a decades-long tampon user, the idea of the panties is a little off-putting to me. Maybe in practice they are really that amazing, but conceptually I am not intrigued. But I have discovered my own game-changer period “tech” – the menstrual cup. It occurred to me that perhaps the panties are “zero-waste for pad users,” and the cup is “zero-waste for tampon users”? But I digress.

I will admit that in order to use a menstrual cup, you must be comfortable with your period and with your body. You will come in contact with your blood, and you definitely need to be able to locate your cervix. But only a couple of times each day.

Let me backtrack a little. For those of you who aren’t familiar with the concept, the menstrual cup (sometimes called a “moon cup,” and you may’ve heard of the DivaCup brand) is a silicone cup that you insert into your vagina when you have your period. It suctions up around your cervix, and neatly collects the flow that is coming out. Two or three times a day, you reach in there, break the seal, pull it out, and dump the contents into the toilet. Then you rinse it off and reinsert. Assuming it’s correctly positioned, it doesn’t leak, it holds a lot, and when you’re using one, you can almost forget that there’s a period happening.

When I first tried it, I kept going to the bathroom, terrified that it was leaking, but it literally didn’t leak even once. (It was the middle of the summer, and it turned out I was just a little sweaty between my thighs…) Obviously your mileage will vary, and it could take a bit of time to learn how to position it properly, but once you know what you’re doing, you will be amazed.

Everyone has the question, what do you do in a public bathroom, where you can’t exactly go from the stall to the sink with blood all over your fingers and the cup (it’s quite the vivid image, eh?)? But the fact is, because it has such staying power, with proper logistics, you should be able to get through your day’s public-bathroom needs without having to take it out at all – or you simply wipe with a piece of toilet paper. On a good day, I see it in the morning, before bed, and maybe once in the middle. At the beginning I would take it out more often, but then I realized that it was absolutely unnecessary, and I began to trust the system.

How did I get into this in the first place? I was a Mirena user for the better part of a decade, and at some point, my body started telling me that it was time to get off the hormones, to go au naturel. I had been quite spoiled by not having much of a period at all over that time, and going back to the monthly routine (dealing with Nidda, birth control, and having periods) was quite overwhelming. Over the course of a few months, with a lot of trial and error (and generous doses of rabbinic and medical consultation), I figured out how to optimize each of those pieces of the puzzle. That is a much bigger story (maybe for a different blog post…?) but for now I’ll just say that the cup was a huge part of the overall solution. I am in my late 40s, and hopefully won’t need to do this for that much longer, but with the cup, I almost look forward to having my period, and I can’t believe I went through all those years of periods without it.

Oh, one more thing — I ordered mine from AliExpress. I was very reluctant to spend $25 (or more!) on something that I wasn’t sure was right for me, but by buying directly from China, it was a much lower-risk investment (and yes I know there are those who would raise an eyebrow about purchasing such an intimate object from this type of source, but who are we kidding — they are probably all coming from there to begin with, whether you pay the extra $22 to a middleman or not). In fact, the first one I ordered turned out not to be the optimal shape for me, and with the help of the awesome “quiz” on the Put A Cup In It website (yes, that’s a thing!), I figured out what type I needed (mine is more bowl-shaped than the DivaCup, for example), and the new one was in my mailbox before my next cycle started.

So give it a shot. It just might change your life, or at the very least, a few days out of each month.