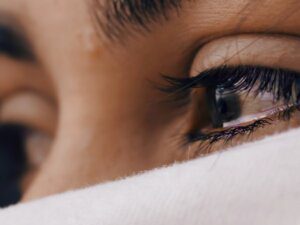 Disclaimer: This blog is the personal opinion of the author. The Eden Center does not endorse positions stated in blogs, but allows authors’ voices to be heard on this platform. Additionally, please be aware that this blog discusses rape, which can be triggering. Read at your own discretion.

So when I first started writing this, I thought I had one agenda. But it turns out, I had a totally different one.

I know that you must think that if I have the audacity to write about the new Netflix release, “The Luckiest Girl Alive”, I must have a story to tell. You must believe I will probably finally state my narrative in honor of this movie, Ani’s (fictional) story, and in honor of Ani (Mila Kunis) representing millions of women who have that (non-fictional) scenario really happen to them.

But alas, there is no story. I have no personal encounter to share. No drama. No hidden secret. You see, I was never raped.

Here is where it gets tricky. Rape is defined in Webster’s dictionary as “unlawful sexual activity and usually sexual intercourse carried out forcibly or under threat of injury against a person’s will or with a person who is beneath a certain age or incapable of valid consent because of mental illness, mental deficiency, intoxication, unconsciousness, or deception as not having consent with verbal or clear motion communication”.

But  the definition of rape doesn’t include your not agreeing through thoughts. Therefore, I understand that if it was in your mind, it doesn’t count. From what I see, if a female is thinking “I don’t want this” but can’t or won’t (for whatever reason) verbalize that sentiment, it is not considered rape because thought does not dictate the laws of consent and non-consent.

I remember a teacher telling me once that I can’t think a prayer, I must say prayer, or it doesn’t count. I was young when she told me this, and even then I remember how awful that sounded. We say God sees and hears everything in our minds, for sure all the bad things we think. We ask for forgiveness for our bad thoughts in Vidui (the confessional prayer), He obviously hears those, so why not the good? I disagreed and still disagree so much! Of course God hears my prayers in thought.

There I go again, going off on a tangent.

Oh but, honey dear, I am not deviating at all off the topic at hand by even an inch.

If I think “I don’t want to be with with this person” but I don’t say it, for whatever reason there was, is it rape?

Let’s start this over again.

Yes, I do feel conviction to write this after watching this movie, because I was so quick to “not identify” with Ani, who was gang raped in high school. It turns out, my conviction in writing this is about owning that I was raped.

In my opinion, there is no spectrum with rape- rape is rape. But then let’s try to scale these scenarios.

Scenario 1:  A  woman’s mouth is taped shut. She is protesting with hands and sounds, but did she  “verbalize consent”?  Well, no, her mouth was taped!

Ok, then you look back at the definition and see motions are considered consent? Good. Good.

So scenario 7: A woman who is thinking, “I don’t want this”, but is being told she will be paid $10k to do this, and she really needs the money to help her dying sister. 8: A woman who can’t leave her husband because their special needs child needs the husband’s work insurance, but she despises him and every time she is with him she is thinking “I’m being raped”. 9: A woman who is thinking “I don’t like being together with this person and this is against my psychological and emotional will”, but she is trapped in this marriage for a myriad of valid reasons. 10: A woman whose life is being threatened if she leaves her partner.

Are these women being raped?

Legally, thinking non-consent won’t give you a story in court. Is someone who thinks about murder, but doesn’t do it, subject to life in prison for manslaughter? I would think not.

But that doesn’t change one’s experiences. And by ‘one’s’ I mean ‘mine’.

No matter what is considered legal, and no matter the scenario, your inner experience is how you define rape. If you thought “I don’t want to be this person” you were raped. I see you. I believe that the narrative you should tell yourself is ‘I was raped, and I am a victim like anyone else.”

I didn’t want to be with him, and it was against my internal will. I didn’t say no, I couldn’t, I wouldn’t; but I thought it, felt it and I still hold onto those memories. The same memories typical raped women have. Traumatic memories. Memories of fleeing one’s own body to escape the rapist’s presence.

I believe that these scenarios are psychological rape: women who were raped in their minds. And these women are victims too. These women are trapped in their own thoughts. Chances are, if a woman is staying in a relationship like that, even if the reason has religious ties, is about the community talking, is about money or the children, the reason doesn’t make a difference. She didn’t want to be with someone, but she was, and I think that that was a psychological rape.

Now rape victims out there, the heroines, the survivors, maybe those women will tell me it’s like comparing the common cold to cancer. It’s incomparable.

I disagree. I talk to women who share these sentiments from experience. The definition of rape might not be stamped in our stories, but the feelings we walked away with are equally painful.

Being with someone you don’t want to be with is painfully damaging. Especially if it goes on for a long time. Especially if children are conceived and you know those children were not born out of love. Especially if you go from doctor to doctor. being told something is wrong with you, and getting medications and diagnoses, when all that is really going on is that you simply tighten up because you don’t want him to enter you.

My way of saying no was diagnosed, labeled, and treatment was attempted, but never questioned or validated.

I am not a victim of rape like all other raped women, and I mean zero disrespect to these heroines, but this movie brought home an important point for me. I believe that rape is truly defined by the person who experienced it, and if they say they felt raped, you should treat them as if they were.

About the Author: Sarah Bechor

Sarah Bechor is a freelance writer in addition to her full-time job at United Hatzalah. She made Aliyah in 2007 and now lives with her husband and children in Gush Etzion. She is a recent graduate of the Eden Center Kallah Teacher Training Course.