It had been three years since their last vacation together and Shuli was euphoric to spend the next 12 days alone with her husband in paradise.  The plane had just taken off and she desperately needed to go to the bathroom. To her tremendous disappointment, she discovered that she was bleeding though she had just gone to the mikveh last week (it had taken her 16 days to get there). After all,  her trip had been planned for a time when she would not be in niddah. At the age of 48, her periods were erratic, too long and arrived more often than she would like. Now, she would be forbidden to her husband for the entire vacation.

Was all of this bleeding due to perimenopause?  Menopause is derived from the Greek, meno, moon and pause, cessation. It refers to cessation of monthly bleeding for 12 months.

Yet, a more appropriate phrase to describe this period in a woman’s life is the Hebrew expression, gil ha’ma’avar, the period of transition.  Indeed, perimenopause, the years leading up to the final period can be a confusing journey.  As the ovaries make less estrogen, fluctuations in hormones may cause unpredictable bleeding, hot flashes, sexual dysfunction and difficulties with memory.  Long-term estrogen depletion can lead to bone loss, heart disease, dementia, weight gain and change in body composition, skin changes, wrinkles and loss of balance.  This stage of life with its hormonal changes can create several unique halakhic challenges. Women may have shorter menstrual cycles and spotting between cycles putting them into niddah more often.  They may experience heavier and more prolonged menstrual bleeding making it more challenging to get out of niddah. Towards the end of the perimenopausal period women experience lengthening of the interval between menstrual cycles which makes calculating onat prisha, the time of separation prior to a period, confusing and complicated.  Eventually, when a woman goes three months without a period she considered msuleket damim (free of bleeding), and no longer needs to worry about the time of separation.  Her years of mikveh observance cease. Are there steps that one can take to make this period of transition, easier? How can one best navigate this challenging stage of life?

Shuli’s recent menstrual complications and niddah frustrations are typical of perimenopause.  Shortened menstrual cycles may mean that a woman goes to the mikveh and a few days later stains or bleeds again leaving her with maddeningly few days to be with her husband and no control over when she is a niddah.  Although a flow of blood typical of a period does render a woman a niddah, not all stains (referred to as ketamim) qualify as niddah. The Mishna in niddah recounts a story when a woman came to Rabbi Akiva to ascertain the status of a stain, and Rabbi Akiva declared her permitted to her husband reasoning that  the laws of ketamim are rabbinic and we apply leniencies whenever possible. Thus, built in to the laws of ketamim are many exemptions based on size of the stain, material and color of the surface on which the stain is found and attribution of the blood stain to a non-uterine source. Because the laws of ketamim do not apply to stains that appear on colored surfaces, Rama recommends that women who are not in niddah wear colored underwear “to save them from stains.” Relying on these exemptions can increase the amount of time a couple are permitted to each other and ease the burden of shortened cycles and intermenstrual staining typical of the perimenopausal period. In addition, waiting to wipe after urination, not looking when one urinates or at the toilet paper after wiping, averting unnecessary bedikot or insertion of a tampon (unless one is certain that she is a niddah) can help avoid becoming a niddah from stains.  While many women feel like they are cheating the system by taking precautions to avoid becoming niddah from spotting, one must remember that halakha seeks to limit the amount of time that a woman is in niddah. Indeed, truncated intervals between periods and intermenstrual spotting severely interfere with the Biblical mitzvah of Onah, the husband’s conjugal obligations toward his wife.

For women with prolonged perimenopausal bleeding, it may take many days to obtain an adequate hefsek taharah. The Jeruasalem Talmud (Nidah 2:4)  states, “It is forbidden for a woman to remain in niddah,” suggesting that within the halakhic framework every effort must be made to help a woman become tehora.  To this end, the support of a halakhic authority to navigate the process of tahara may be especially critical during perimenopause. Soaking in a bath prior to the hefsek may help achieve a better hefsek.  It is important to be aware that yellow or light brown colors on a hefsek or bedikah are acceptable. Rather than categorically assuming that a questionable color of a bedikah or stain is prohibited (invalidating the process of tahara and starting all over again), one should consult with a halakhic authority and even bring the questionable hefsek, bedika cloth or stain for evaluation.  If achieving an acceptable bedikah is challenging, consulting with a halakhic authority regarding reducing the number of bedikot may also be worthwhile. Because spotting during the shiva nekiim can invalidate the entire process of tahara, many of the recommendations to prevent stains from becoming niddah in between periods also apply during shiva nekiim, including not looking when one urinates, waiting to wipe after urination and not looking at toilet paper after wiping.

Towards the end of the perimenopausal period, the interval between periods may become longer and women may wonder, “Am I pregnant or is this just menopause?!” a legitimate concern given that some older women may still be able to become pregnant. With unpredictable and erratic cycles, calculating onat prisha, the time of separation, in anticipation of a period can be confusing but may be simplified by consulting with a halakhic authority or using an app such as Mikvahcalendar.com.  Once 90 days have elapsed without a period, a woman is considered mesuleket damim and if she is at the age of menopause (defined by some rabbinic authorities as 53) then she achieves the halakhic status of zekena, allowing her to cease to observe onot perishah (unless she resumes menstruating three times or menstruates on the date of a prior veset kavua).

Upon her husband’s suggestion and prompting, Shuli contacted me in my capacity as a morah l’halakha and described the circumstances of her bleeding.  I reassured her that she in fact was not in niddah as she did not experience a flow, and the blood was only seen on colored underwear but that some halachic authorities recommend abstaining from intercourse for 24 hours to determine if the blood stain represented the beginning of a period.  Luckily, there was no further bleeding, and the couple enjoyed a well-deserved vacation together. Since then, Shuli consults regularly to to help her get an acceptable hefsek tahara earlier and prevent spotting from invalidating her shiva nekiim or sending her back into niddah shortly after she visits the mikveh.

Dr. Grossman will be presenting these and other issues in her talk “Halakhic Challenges and Solutions” at the upcoming “Straight Talk about PreMenopause” series in Raanana April 29 and May 13, 2019. For more information or to register: info@theEdenCenter.com 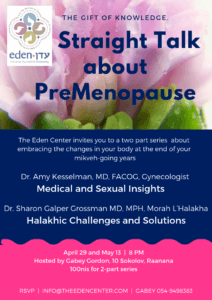