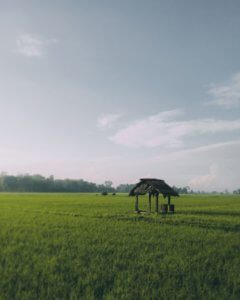 (1)The entire congregation of the children of Israel arrived at the desert of Zin in the first month, and the people settled in Kadesh. Miriam died there and was buried there. (2) The congregation had no water; so they assembled against Moses and Aaron.

Our Sages connect these two verses by cause and effect (Tosefta Sota 11a; Rashi on the verse, and others): ‘As long as Miriam was alive, a well watered Israel. When Miriam died what does it say? “And Miriam died there and there was no water for the congregation”, as the well disappeared.

The well is mentioned as one of the gifts associated with the three leaders in the desert:

‘Since Israel left Egypt there were appointed three good supporters: Moshe, Aron and Miriam. In their merit, they (Israel) received three gifts… a well in the merit of Miriam, the pillar of cloud in the merit of Aron, manna in the merit of Moshe; When Miriam died- the well was canceled.’  This well is described in another place in the Tosefta (Sukka 3/11) in more detail: The well that was with Israel in the desert- resembling a boulder with many holes, like a sieve, bubbling and rising… going up mountains with them and down into valleys, in places where Israel camped, it resided across from them, in a high place across from the entrance to Ohel Moed, the princes/chiefs of Israel come and surround it with their staffs and recite the song ‘Come up well and answer her. Come up well and answer her’ and they bubble and rise like a pillar, and each one pulls his staff, a man for his tribe and a man for his family.”

Some suggest that the well in Chapter 21:16, is the well of which God said to Moshe, ‘Gather the people, and I will give them water’ is the same well the disappeared with the parting of Miriam, and that is the boulder that Moshe hit.

The well is mentioned in Pirkei Avot 5:6, as one of the ten things that were created on the Eve of Shabbat at dusk, wonderful and miraculous items: ‘the manna, the staff, the shamir worm, the mouth of the earth, the mouth of the well…’

What is the connection between Miriam and the well? Why is she specifically the one to be tied to the wondrous source of water for the nation of Israel?

The Midrash has a simple answer (Tanchuma Bamidbar 2): ‘And the well in merit of Miriam, who recited song upon the water.’   Additionally the connection with water is strengthened by  Miriam’s part in saving Moshe from the Nile (there too she stood upon the water) and maybe also her name, Miriam, for there are those who interpret it as stemming from the word ‘Mar’, meaning a drop (‘Mar M’dli- Isaiah 40).

Seemingly, with the entrance to the Land of Israel the well should have become a thing of the past, another one of the miracles of our forefathers to passed on in storytelling from generation to generation, like what happened with the other two gifts- the manna and pillar of cloud.  However, to much surprise the tradition of the well continues to exist as a living and relevant phenomenon in the days of the Sages as well as medieval times. Thus, for example, we find in the Midrash Vayikra Raba, from the 5th century: ‘ And where is Miriam’s well? R. Hiyya bar Abba said: It is written, ‘And we shall look upon the wilderness’, that whoever rises up on the top of the Yisimon mountain and sees a kind of small sieve in the sea of ​​Tiberias, that is the well of Miriam.’

We have a Galilean tradition (Vayikra Rabba was written in the Galilee), which is able to point out the location of the well of Miriam in the Sea of ​​Galilee. It turns out that the well continued to wander, it did not remain in the desert, rather entered the land with the Children of Israel.

According to a later source, Pirkei D Rabbi Eliezer, chapter 35, the well wandered with the patriarchs even before the generation of the desert:   Wherever forefathers were going, the well would go with them. Abraham dug in the land three times and found it before him … Isaac dug in the land four times and found it before him … This is the well that is going to go up to Jerusalem and irrigate all of its surroundings, as is written ‘and on that day living waters will come from Jerusalem’ (Zechariah 14) And that is the well that accompanied the people of Israel in the desert.

The Ramban, in his commentary on our parasha (Bamidbar 20: 8), adds other events in which the well appeared:

“The intention of our rabbis in Miriam’s well, which was always a miraculous source of living water, stems from wherever there is a desire for it. He brought him up to Ishmael in the desert of Beer-sheba, and he split it in Horev from the cliff that was there, and in the rest of the journeys it came from the rock near the place of the encampment”.

As such, the well becomes a phenomenon about time and place, and appears in every generation and every opportunity. Not only that, but even in later generations the well continued to exist in the consciousness of the people: according to an ancient Ashkenazi tradition, the women used to – in Europe! -pump water on Saturday night immediately after the end of the Sabbath, because this is the time when Miriam’s well rolls through the rivers and streams and all the water sources. Incidentally, this is probably the reason why in Havdala we say the verse ‘And you shall draw water with joy from the springs of salvation’.

So in what merit did the well continue to exist, while the manna and the pillar of cloud cease?

Miriam, as opposed to Moshe, offers another model of leadership – not aggressive and angry but maternal and compassionate, not striking the rock, but singing to him.

Upon entering the country, the three leaders died and the three gifts ceased. Moses was replaced by Joshua, Aaron was succeeded by Elazar, and what about Miriam?  Since we entered Israel and throughout our history, this is probably the leadership that we lack most, and for which we continue to search in every time and place– finding her in the well and the calmness of the water which purifies, reinvigorates and brings life to all things.

About the Author: Gila Vachman