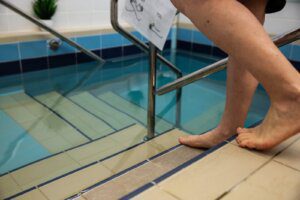 I firmly believe that every woman is entitled to have the mikveh experience that she wants and desires, within the bounds of halacha. Once a woman feels empowered in her role as a tovelet, she can then be open to other positive, perhaps more spiritual, aspects of going to the mikveh.  Over my time as a balanit and kallah teacher, I have seen a trend where today many women don’t enjoy going to the mikveh. When asked why, these seem to top the lists:- lack of privacy, feelings of exposure, concern over a negative encounter with the balanit, and limited, sometimes inconvenient hours.

As a tovelet advocate, I believe that every woman should understand her rights before going to the  mikveh. Learning the halachot and the rules of the local mikveh can empower a woman to have a better, more successful and meaningful mikveh experience. What follows are my tips as an attendant for every woman coming to use the mikveh.

Know the role of the balanit (attendant).  According to the Shulchan Aruch  (שולחן ערוך יורה דעה סימן ר סעיף מ) the role of the balanit is very simple:- to ensure that all the tovelet’s hair gets under the water, so that all of her body is immersed at the same time. That being said, there is a long tradition in some communities that the balanit assists a woman and checks her to make sure there are no chatzitzot (physical barriers). In those communities, this is the accepted and expected role of the attendant, and many women are thankful for it. However, as stated above, according to the halacha, an attendant’s job is simply to make sure the tovelet is fully immersed. That’s it. Prepping is ultimately the tovelet’s responsibility and under her ownership.  While some women do appreciate having someone go over a checklist or offering to check their backs, other women prefer a more “hands off” approach.  Don’t be afraid to speak up and ask for what you want or don’t want. Take ownership of your tevillah. Know before you go:- is the mikveh I’m going to more hands on or not? If it’s some place I may not be comfortable, might I try to toivel elsewhere, if possible?

Additionally, concerns about privacy and exposure are very real for some women. Whether suffering from abuse, having surgeries that left scars, or even general body image concerns, there are things you can do at the mikveh to feel like you have more privacy. You can ask the balanit to turn around (or partially step out of the room) as you enter and exit the water. You can face away from the attendant while you dip. In Israel as of 2016 – after a public debate elicited by a Bagatz and women’s testimony, the Rabbanut recognized that, while not לכתחילה (halakhic term for the first choice), there is room within halacha for a woman who wants to tovel without a balanit to do so. While this nationwide ruling is sometimes contested, and specifically exclusive to Israel, there are communities outside of Israel that have accepted this and allow women to toivel alone, as well as many women who express a preference for this.

Last but certainly not least are issues surrounding time accessibility. Many women have a hard time going to the mikveh during its usual opening hours. I have often been asked why it is that in the winter many mikvaot aren’t open until much later than the earliest of tevillah times? Why is it that in some communities, on motzei Shabbat/Yom Tov, women have to wait two hours before the first appointment? Why do women in some communities have to delay mikveh night because they’re told they cannot go during the da,y even though they have very good reasons why their actual night is not easily possible? These are questions without universal answers and once again, I implore you, as users of your mikveh, to advocate, advocate, advocate!! I can almost guarantee you, you’re not alone in asking these questions. Work with your local mikvaot towards finding a solution that fits the needs of tovlot in your area. Resources like The Eden Center offer anyone a chance to be a balanit with an excellent and thorough course. Be part of the solution.

According to Maslow’s hierarchy of needs, only once a person’s physical and safety needs are met, can one achieve transcendence. When we, as a community, work toward finding more reasons to let our ladies dip in the most dignified and accessible ways possible, then the mikveh experience can be truly uplifting and meaningful.

About the Author: Batyah Cohen

Batyah Cohen is a certified בלנית- mikveh attendant and kallah teacher. She has worked for close to 15 years in mikvaot in the US and Israel and been teaching brides for about the same. Batyah is originally certified by the Chicago Mikvah Association and Daughters of Israel Chicago. After recently making aliyah, she became recertified through the Eden Center and is now able to work with and teach women in Israel.