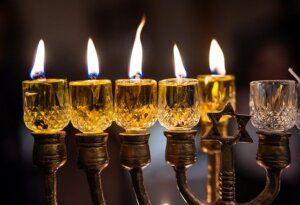 As we enter Chanukah, I am struck with the way that we build light.

There is the very famous debate between Beit Hillel and Beit Shammai as to how we light the Chanukah candles– do we light one candle the first night and build night after night, until we have all 8 lit? Or do we start fully majestically lit, and reduce the light by one each night?

Interestingly, neither camp seems to ask “should we light 8 candles each night.” After all, why is there the idea at all that there should be a gradual change night after night?

Chanukah is emblematic of man. It is a story of uncertainty. Let’s put ourselves back in time, right before the Chanukah story. The Jews of the Hellenistic period did not know what was going to happen. The Yevanim were in charge, and brought with them hellenism, transforming society to be less and less Jewish. The Macabees saw the light of their Jewish lives slowly being snuffed out. What to do?

We all walk through life with uncertainty. We do not have a crystal ball, and yet we must make decisions as best as we can, often wrestling with the ideas of guilt and fear of regret. We act in ways we think are best for ourselves, our relationships, our families, and our communities. Life is often about making choices at crossroads, and whatever choice you make, you hope that it will turn out the way that you intend.

We make many decisions in the dark. We try to find information to best illuminate the path, but we rarely have all the light we would like. We are not God, where we can just say ויהי אור.

When God makes light– it can happen with certainty and suddenness, with knowledge of “Vayehi Tov”– that it is good. When mankind makes light, makes change and decisions, it is slow, it is gradual. Both Beit Hillel and Beit Shamai seem to acknowledge that human history comes with partial illumination.

To me, Beit Hillel’s opinion reflects optimism symbolic of growth. There is darkness until we light one light. And then one light becomes two lights, and then three lights. Knowledge, action, and reflection lead to more knowledge, action and reflection, until we have the whole story laid out in front of us, symbolized by the Chanukiya completely majestically lit.

It is true that not every story has a happy ending, and there can be regret and unintended consequences.

Maybe that is why Chanukah is an annual holiday, celebrated by Jews of all different ideologies. There is always next year, there is always the next story. We have a chance each year to see what choices we can now make, what next steps we now take, what lights we now light and then we see where it takes us. It is the ultimate story of mankind and of hope.

Wishing everyone a Chag Chanukah Sameach and a year of light.

Dr. Karen Wasserstein is a psychologist in Maryland and Virginia specializing in working with those undergoing fertility challenges, and a recent graduate of Eden’s mikveh attendant training course. She can be reached at drkwasserstein@gmail.com

About the Author: Karen Wasserstein