‘Hope And Purity’: The Mikveh-Attendant’s Book On Breast Cancer 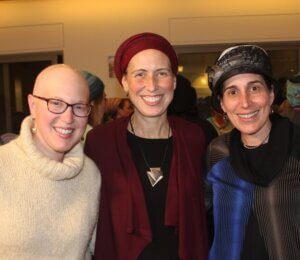 This article appeared in the Five Towns Jewish Times on December 21, 2017.

On November 22, a groundbreaking event took place in Jerusalem. It was the launch of a soft-cover Hebrew book (English pending) titled “Tikvah V’Taharah” (Toward Hope and Healing: The Eden Center’s Breast Cancer Awareness and Sensitivity Guide for Mikveh Attendants), to be distributed to mikveh attendants (balaniot) throughout Israel. The book’s goal is to raise awareness and sensitivity among the balaniot to women who have undergone treatment and surgery for breast cancer. It also relates to halachic questions that arise regarding tevilah.

Over 70 women, passionate about women’s health, attended the evening in the beautiful Jerusalem home of Nicky Newfield, chair of Eden’s board of directors. It was an inspiring evening, filled with camaraderie and support for women with breast cancer, and support for the important education that the Eden Center is disseminating.

The evening was introduced by Dr. Naomi Marmon Grumet, founder and director of the Eden Center. Dr. Marmon Grumet’s doctoral research, “An Examination of the Interface of Taharat Hamishpacha and Identity among Modern Orthodox Women and Men,” in which she interviewed husbands and wives in couples who observe taharat ha’mishpacha, was the catalyst upon which the Eden Center was founded.

The mission of the Eden Center is to make mikveh welcoming to those women for whom it has become alienating or uncomfortable, to emphasize the spiritual and positive, to create a sacred space for women, and to rejuvenate the experience even as women are, once a month, rejuvenating their bodies.

But they have an additional agenda: to promote women’s health and psychological wellbeing. This includes helping women deal with issues such as intimacy, infertility and miscarriage, body image, and lifecycle events. Eden leads professional training seminars for mikveh attendants to help them understand more about these topics, and to learn how to relate to women who are dealing with issues such as abuse, postpartum depression, and OCD. They also hold advanced kallah and chattan training courses that include the integration of these and other sensitive topics. Eden has published other educational pamphlets and blog posts.

Impetus For The Publication Of
‘Hope And Purity’

Dr. Marmon Grumet says, “Breast cancer is a serious issue in our community and is no longer a concern solely for postmenopausal women. Over the last couple of years, the rate of breast cancer has risen from 1 in 9 to somewhere between 1 in 6 or 7 women in Israel (according to the Israel Cancer Association, our contact at Shaare Zedek, and others). Our awareness about the BRCA gene mutation, and the search for preventive treatments, including mastectomy, have also risen. And there is always a need to educate women. 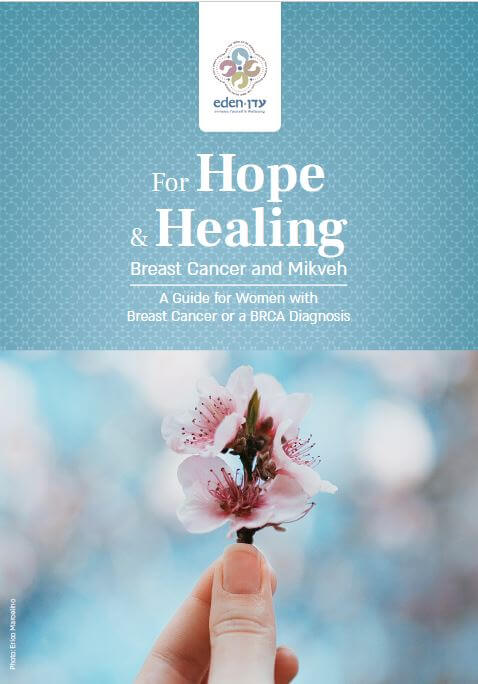 “In my research on mikveh, I discovered how difficult it can be to be going through breast cancer and using the mikveh. A survivor described how hard it was to prepare physically, the emotional toll of having someone else see your scars, the desire not to be pitied, and more. A few years ago, when the Eden Center was developing our course to train balaniot in sensitivity, we included a session to raise awareness of breast cancer and the need for regular checkups, and we include that in every mikveh-attendant training course we have. It is one session that the attendants always tell us makes a personal difference for them, and a difference in their work.”

Dr. Marmon Grumet shared stories from mikveh attendants who, thanks to Eden workshops, were able to gently suggest to certain women that they get checked by a doctor; in some cases, the women returned to tell the attendant, “You saved my life.”

“We saw a groundswell of need—both on the part of balaniot and on the part of mikveh users—to have more information and more sensitivity about the issues surrounding BRCA, breast cancer, and mikveh—in writing,” says Dr. Marmon Grumet, “with widespread dissemination and with halachic guidance from which so many organizations shy away.”

She says that Toward Hope and Healing was written in partnership with Sharsheret and in consultation with Shaare Zedek Medical Center, the Israel Cancer Society, Rabbanit Shani Taragin, and Sharon Galper (a Harvard-trained oncologist), and that the guide does three things:

A key speaker was Noa Choritz (#theforceofNoa), who blogged for Eden last year about her BRCA mutancy and her preventive mastectomy’s impact on her final mikveh experiences. Despite her preventive actions, Noa is now undergoing treatment for breast cancer. She gave practical suggestions for women and mikveh attendants, and she empowered all with her positive attitude and tremendous strength.

Noa says, “It is generally expected that we treat a new bride and newly married woman with extra sensitivity. What if we were to treat women at the end of their mikveh-going lives with the same extra kindness? Particularly breast cancer patients who may experience menopause well before the ‘normal’ age and without very much warning. My body now looks very different than I am used to. I have no breasts, no hair, and I have gained 10 kilos. If a mikveh attendant were to show anything but the utmost acceptance—even by looking a second too long—it would ruin mikveh night for me, an already fragile experience.”

In a moving presentation, Rabbanit Shani Taragin then described how, when she asked her doctor for a mammogram at age 40, he told her she had at least another five years before she needed one. Three months later, while checking herself before toiveling in the lake at Camp Moshava, where she was a scholar-in-residence for the summer, she found a lump that turned out to be cancerous. (The story can be read on her Eden blog called “The Lump at the Lake.”) She coauthored the Eden book, and she described the sensitive and loving treatment she received from the balaniot at her final mikveh visits.

Rabbanit Taragin concluded with a shiur on the topic of v’nishmartem me’od l’nafshoteichem (Devarim 4:15), “And you shall watch over yourselves very well,” which included sources from the Gemara, Rambam, Shulchan Aruch, and the Chofetz Chaim, among others, all explaining the importance of living a healthy lifestyle and refraining from dangerous behaviors.

This is the place to acknowledge the work of Michal Schonbrun, a women’s health activist and a workshop facilitator in the FAM fertility method, who, 40 years ago, was reaching out to women about the importance of self-breast-checks; she also reached out to rabbanim in the chareidi and religious sector, and was thus instrumental in raising awareness among women in all segments of Israeli society to the importance of self-checking.

Based on the enthusiastic feedback from the evening, the Eden Center plans to launch similar events in different cities in Israel, in Hebrew and English, and to adapt the material to create a guide for mikveh-using women with breast cancer. Sponsorship opportunities can be found at TheEdenCenter.com.

In closing, I want to express gratitude to both Noa and Rabbanit Shani, who were among my advisers this year when I experienced my own journey with breast cancer. But that’s a story for another time.

The author is an award-winning theater director who produced and directed Raise Your Spirits Theatre’s musical “Ruth & Naomi in the Fields of Bethlehem: the Revival” this year, in between chemotherapy treatments (#journeyofthedove). She is the editor-in-chief of WholeFamily.com.

To receive a copy of “For Hope and Healing” – English Version, or “Tikvah V’Taharah” – Hebrew version, please click here.