Navigating Relational and Sexual Intimacy at Midlife and Beyond

Navigating Relational and Sexual Intimacy at Midlife and Beyond 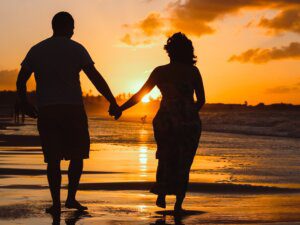 The sexual life of a couple changes throughout the life cycle, as both partners navigate life’s transitions including but not limited to new marriage, childbirth, raising teens, caring for elderly parent. As couples enter middle age, they acquire new responsibilities personally, socially and professionally which can impact on their identities, such as work promotions or adjusting to new roles as grandparents. Over time some couples develop deeper intimacy and connection while others experience distancing, “growing apart” or frequent conflict.

There are many factors that contribute to changes in the couple’s intimate and sexual life around midlife. Some are of a practical nature, such as the challenge of finding time and space for making love in a home with older children wandering about at all hours. Some are more existential and have to do with finding value and meaning in sex that is unrelated to reproduction. Other influences have to do with physical, psychological or relational changes. Direct and open communication often helps couples to best navigate the effects of these changes on their sexual lives.

For Jewish observant couples who have followed the laws of niddah the flow and rhythm of sexual interactions have been determined by their menstrual cycle and the niddah framework. The laws may become a source of stress during the perimenopausal years when periods may be frequent and of longer duration, or random and unpredictable. Couples who experienced the cyclical nature of Taharat HaMishpacha as positively affecting their sexual lives and appreciated the monthly renewal of physical intimacy as a way to perpetuate passion and desire, may wonder how to keep the passion alive as they adjust to this new reality. Other couples, particularly those who did not find the laws enhancing to their sexual lives, will welcome the freedom from the on and off cycle of Taharat Hamishpacha or concerns about niddah constraints and ritual observances.

In addition to the changes affected by life cycle events and ritual practice, negative cultural messages about sex and aging, as well as the physical and psychological changes at midlife for both men and women, inform the experience of aging and sexuality.

Sexual ageism negatively informs attitudes about older people and sexuality. Israeli researcher Ateret Gewirtz Meydan1 studied ageist sexual messages and misconceptions such as “older people shouldn’t have sex.” She and her colleagues found that many physicians held negative attitudes about sexuality in older adults and were embarrassed to raise the topic of sex with older patients.

Menopause is associated with both physical and psychological changes.
As women age, declining levels of estrogen contribute to physical symptoms such as hot flashes, night sweats, weight gain and bloating and psychological issues such as irritability, anxiety and depression, mood swings, fatigue, and sleeping difficulties. It is not unusual to experience decreased sexual desire. Some women benefit from hormonal therapy while for others this is not a desired or appropriate choice.

The pelvic floor muscles that support the bladder, uterus and vagina often become weakened, resulting in the dropping down and potential prolapse of one or more of those organs. It may feel physically uncomfortable for either or both partners, and often affects a woman’s body image. It is not unusual to experience urinary symptoms such as frequent urinary tract infections, urinary frequency and incontinence. Changes in the genitalia include decreased blood flow to the vagina and clitoris, as well as thinning of the mucosal lining of the vagina, resulting in dryness and atrophy. This may make intercourse feel uncomfortable or even painful and using a lubricant may be extremely helpful. These symptoms are associated with decreased sexual functioning and satisfaction. Pelvic floor exercises that strengthen muscles and help increase blood flow to the vagina and clitoris can help to improve sexual response. A pelvic floor physical therapist can be very useful in helping to strengthen the pelvic floor and alleviating these symptoms.

The changes that men undergo as they age have been referred to by some as andropause. A decline in male hormones may contribute to changes which affect health and sexual function. Prostate conditions are common in men, and symptoms such as urinary frequency, difficulty urinating, and urethral burning may have both physical and psychological effects on sexual desire and function. Erectile difficulties and premature or delayed ejaculation are not uncommon.

In both men and women, hypertension, diabetes, chronic pain and arthritis may be conditions related to aging. Many systems of the body may be affected, including sexual functioning, due to decreased blood flow to the genital area and other physical symptoms. As people age, they experience changes in sensation, and may no longer enjoy the type of touch they did in the past. Dry mouth may make kissing or oral sex difficult. Aches and pains and the overall decrease in endurance and mobility limit certain positions, and couples may need to “take a break” and catch their breath several times during sex. Because of these changes, it may take longer for a man or woman to become sexually aroused, it may take more time and effort to reach orgasm and the intensity of the orgasm is sometimes decreased. However, for some women and men, the positive experience of sex is greatly increased through enhanced sensitivity and a deeper and more intense experience of orgasm. Both men and women should discuss physical, psychological and sexual responses with their doctor or sexual health professional.
All these physical symptoms would seem to indicate that sexuality changes as couples age, and not for the better. In fact, most of the medical literature focuses on the physical changes related to decreased hormone levels and decreased blood flow to the genitalia. Aging, according to the sexual medicine lens, is correlated with decreased sexual functioning and thus, decreased sexual satisfaction and quality of sexual intimacy.

Yet, determining the quality of sexual intimacy based on frequency of intercourse, hard erections, or the ability to get into various sexual positions without pulling a muscle, may be misguided, because despite those realities, many couples value and enjoy sex well into their later years.

While menopause and andropause can affect arousal, desire and quality of orgasm, many studies have indicated that despite this, older adults report greater overall sexual satisfaction.2 Despite physical changes, studies show that as couples age, they can and do continue to engage in physical intimacy, with or without engaging in actual intercourse, well into their golden years.3 This may seem puzzling but in fact, it indicates that sexual satisfaction is not necessarily related to optimal physical sexual functioning and that penile-vaginal intercourse may not be the defining feature of sexuality for many older couples. Studies on aging and sex, have noted that older couples report that sex is slower, more controlled, and less goal oriented.4 Indeed, noted sex researcher Dr. Peggy Kleinplatz has stated, “optimal sexuality flourishes in the context of a relationship deepening with maturity.”5

In a study on why older couples continue to engage in sex as they age Meydan-Gewirtz6 reported that they expressed wanting to feel attractive and desirable and to feel alive. They also talked about having different motives for sex than when they were younger. Whereas in the past they engaged in sex for reproduction or for the motivation of orgasm, as they age, the focus is on the emotional bond with their partner. And though the focus is on pleasure, orgasm is no longer a goal.

There is an old joke in which a patient who has broken his hand asks his doctor prior to surgery if he will be able to play piano. The doctor responds with hopeful optimism and the patient, looking relieved, replies “that’s great, because I never could play before.”

This joke illustrates what much of the research surrounding sexuality of mature couples demonstrates. The best predictor of sexual life after menopause and in the later years, is the quality of the couple’s intimacy before menopause. Communication around sex is of critical importance, more so than how frequently a couple engages in sexual acts. Communication involves speaking freely about sex, about bodily changes and the vulnerable feelings that can accompany these changes. Maintaining a sense of humor and investing time and effort in prioritizing the couple’s intimate relationship are crucial to continued enjoyment.

Talli Rosenbaum is an individual and couples therapist and a certified sex therapist. She is the academic advisor for Mercaz Yahel, the Center for Jewish Intimacy. Check out Talli’s blog!

About the Author: Talli Rosenbaum

Talli Rosenbaum is an individual and couples therapist and a certified sex therapist. She is the academic advisor for Mercaz Yahel, the Center for Jewish Intimacy.