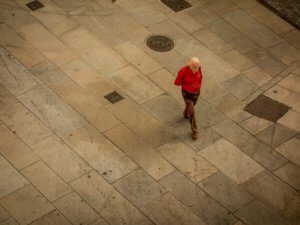 It was my first day of graduate school and one of my professors asked us to go around the room and introduce ourselves and share what brought us to social work. We were a diverse bunch, each person with a different story about why they chose social work and what they hoped to contribute to the field. Most of us were female, in our 20s, and had started graduate school soon after finishing college.

After class was over, I got into conversation with Larry* ( not his real name), one of my new classmates. Larry had a really impressive story;  he came back for a social work degree in his late 60s after a long career as a lawyer because, although he found much success in law, he felt a calling to give back to society in a different way and he decided to go back to school.

As we walked in stride, we traded impressions of our first day and the class we had just finished.

“Rachel, can I ask you something?”, he leaned in, lowering his voice to a confiding whisper. “I feel like I sounded really stupid in my introduction to the class….What did you think?”

I answered, “Actually, your introduction was great. Our group is lucky to have you.” I saw the worry lines on his face relax a little. We continued on our way and it was indeed a gift to have Larry in our class. He had amazing life lessons and experiences and brought a unique perspective to the table. I lost touch with him and haven’t seen him or spoken to him since school, but I never forgot this anecdote.

When Larry asked me what I thought of his introduction, it was one of those moments that taught me so much about insecurity, self-consciousness, and projection. That what are our lives look like on paper– or how we look to others– and how we internally experience life are not the same thing.

In the Torah, when the Jewish people sent spies to check out the land of Israel, the spies came back and reported: “We are unable to go up against the people, for they are stronger than us… We appeared like grasshoppers in our eyes, and that’s how we were in their eyes.”(Bamidbar 13:31-33).

I have observed many cases where discomfort with how one looks can lead someone to isolate and avoid social interactions, or find themselves feeling flooded with obsessive worrying about what others may or may not be thinking about their looks.  Getting dressed becomes about concealing instead of expressing; hiding instead of celebrating. Taking pictures? Well, forget it, but in today’s age of social media not only is it hard to avoid being photographed, there often is no consent for your picture to be posted.  My friends and I joke that “bad hair days” are now documented forever, and it’s not just in your own picture album at home.

While compliments can make us feel good temporarily, becoming more confident with one’s body is an inside job; outside validation is often inadequate in fully healing a wounded body image.  Insecurity often works in a way where, no matter how much reassurance we get from others, old tapes die hard and the voice of “you are not enough” can be a stubborn one to quiet.

What’s helpful? Well, it helps to unpack those old tapes, understand where they come from, what purpose they served, and if we are willing to let go of them.  It’s common to feel ambivalent in letting go of old thought patterns, even if they are detrimental and standing in the way of feeling better. We are drawn to what’s familiar and routine If you think about it, change is our biggest fantasy – but also our biggest fear.

The good news is that we can become kinder to ourselves in our self-evaluation; we can grow to view ourselves with loving compassion, acceptance, and as being enough.  We can embrace who we are and while there may still be moments of worrying about how we appear, the calming, reassuring response can come from within ourselves.

About the Author: Rachel Hercman

Rachel Hercman, LCSW is a psychotherapist specializing in dating and relationship issues, sexual health, and trauma. She is in private practice on the Upper West Side of Manhattan and lectures across the US. Rachel lives with her family in Riverdale, New York and can be reached at rachel@rachelhercman.com .