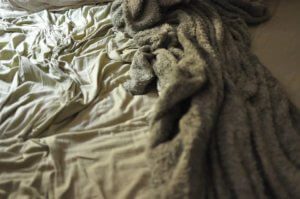 This question recently arrived from one of our followers:

Mikveh night is always filled with tension for me. I always feel anxious about returning home after immersion because my husband is eagerly awaiting my return and our (sexual) reunion after not having had physical contact for two weeks, while I don’t feel ready for it yet and it takes me time to feel the same way. I find it extremely difficult to go from no physical contact to full sexual intimacy immediately after coming home from the mikveh. My husband and I argue a lot about this, and therefore I wanted to ask: are we obligated to have sex on mikveh night?

Rav Rafi Ostroff,  Rosh Moetza Datit of Gush Etzion and Sexual Health Educator, writes in response:
Thank you for your question; it’s a question that many people struggle with.

The Gemara in Tractate Nida (30:1) discusses “the obligation to immerse on time” asking, is there an obligation for a person to immerse and become tahor (purified) at the first possible opportunity?

There are differing opinions among the Rishonim as to what the bottom line is, despite the fact that the Tosafot (in Masechet Beitza 18:2 starting with the words “כל חייבי טבילות”) already wrote that this discussion is no longer relevant since all women today follow the laws of Zavah and immerse after 7 clean days, and, therefore, the question of “first possible opportunity,” as it was meant in the original Gemara discussion, is not applicable at all.

The Shulchan Aruch [197:2] writes that a woman should immerse at the earliest possible opportunity in order “that she not dismiss pru u’rvu – the commandment to reproduce – even for one night.”  The understanding here is that even according to those who believe that there is no obligation to immerse “on time,”  there is still a mitzvah – a halachik obligation – to immerse and become tahor in order to fulfill the mitzvah of ‘pru u’rvu” with one’s husband (as mentioned in the Shevet HaLevi, section 2).

According to the above, it would seem that there is an obligation to be sexually intimate on Mikveh night immediately after immersion.

But what about a situation in which the woman is not currently able to become pregnant? Since the Shulchan Aruch’s reasoning was based on the possibility of fulfilling mitzvah of reproduction, would there still be an obligation for sexual intimacy specifically on mikveh night [if she isn’t able to become pregnant]?

The “Shevet HaLevi” comments in that same section of the Shulchan Aruch that the obligation is not only in order to procreate, but also to allow for closeness and physical contact between a husband and wife even in the absence of full sexual relations. Meaning, that she is required to immerse on time not only for the purpose of reproduction, but also so that a couple can be permitted to touch and be close to one another.

If that is the case, are they obligated to have full sexual relations on that night?

The Gemara in Masechet Eiruvin (100:2) states the following:

The Gemara calls a man who forces his wife to have sexual relations a “sinner.”
It is not referring to actual rape (which is obviously forbidden), but even in a case when the woman has not fully consented, as Rashi explains on the Gemara’s phrase נפש לא טוב  a soul that is not good “Unhealthy children come as a result [of relations] that a woman has not agreed to, when her husband “hastens with his feet”: that is, he wants to have relations immediately (or is being pushy or forceful) — and this is an indication of an unhealthy relationship between them. The Gemara is saying that (God forbid) difficult or “bad” children will result from this kind of sexuality, when the woman doesn’t fully consent.

Putting all this together, we are left with the fact that on the one hand, there seems to be a mitzvah – an obligation – to engage in sexual intimacy at the first opportunity after immersion. On the other hand, there is a very  strong warning against being sexually intimate without the wife’s consent (mutual consent actually).

With this in mind, my advice to you is as follows:

Communicate. Talk about it with one another.

It really comes down to you and your husband discussing this together. I am sure that your husband has no interest in being intimate if you aren’t interested and you don’t feel ready for it. So find an appropriate time and setting to have a serious conversation. Explain that after immersion you find that you need some time before you are ready for full sexual intimacy. Explain that you find the transition from everything being forbidden to everything being permitted difficult, being expected to go from “nothing to full sexual relations” is hard for you, and that you would appreciate a more gradual transition. If you can, you might also want to share with you husband at what point you do see yourself being ready to have sex.

It is important to remember and be sensitive to your husband’s feelings as well. The period of physical separation may be challenging for him too, and it is imperative to acknowledge that his desires and needs are valid. Lastly, keep in mind that the Gemara does discuss the mitzvah involved in this topic.

In my opinion, the ultimate goal is to get to a place where you feel you are ready as a couple to have sex on mikveh night. However, as I said above, only if it is within a healthy and consensual dynamic. You may find that deciding to wait a day or two after immersion before being fully intimate will give you the transition time you need. Commit to trying it for a few months.

And in that case, what might mikveh night look like? Use that night to become reacquainted with each other’s bodies, reintroduce the physical closeness of cuddling and kissing, without the pressure of necessarily having sex that night. With that, I recommend defining clearly for yourselves what the boundaries of physical intimacy will be – what you feel comfortable doing, and what you aren’t ready for – so that you both have the same expectations, and can avoid disappointment. Because at the end of the day, the point of trying to change the dynamic on mikveh night, is to ultimately allow for a mutually enjoyable sexual experience, to add closeness, love, and joy into your relationship, and enable you to find a way to work out what is good for both of you.

Wishing you all the best,